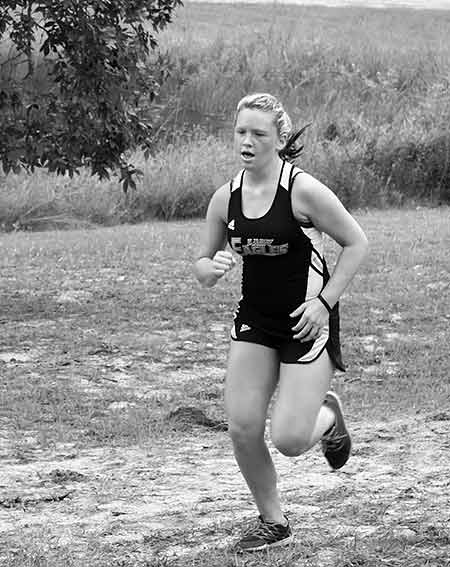 The Woodville Eagle boys and girls traveled to Lake Tejas Saturday to compete in Colmesneil's cross country meet. The weather was perfect after severe thunderstorms Friday night. This would be the first meet for Woodville middle school. The middle school boys and girls competed in a mile and a half loop around Lake Tejas. Amanda Roesler was the lone Lady Eagle in the junior high division. Roesler finished in 17th place with a time of 18:16. The middle school boys competed as a team and Truett McCollum took home the gold medal finishing first with a time of 11:58. Other Eagles earning medals were Chris Barclay third with a time of 12:09, Payton Sims fifth at 12:13, and Eli Shirley tenth running 13:01. Other members of the team included Dayton Swearingon, Trevor Vardeman, and Isaac Ding. All runners finished in the top 17.

Kayla Fontenot and MikaylaAmason represented the Lady Eagles in the junior varsity division. Fontenot won the meet with a time of 19:28. Amason placed fifth at 20:54. The girls competed in a two mile run and this was the first meet for the duo. The boys also had success competing in a five kilometer race. Aaron Mitchell led the Eagles finishing in second place with a time of 17:56. Tyler Hollingsworth finished third at 18:11. Ben Worsley also medaled with a sixth place finish at a time of 18:40. Aaron Garess, Sean O'Neal, Caleb Dinger, and Justin Livingston finished 11-14 and all under 20 minutes.

The Lady Eagles volleyball team took home two more district wins this past week. Woodville defeated Newton in three sets. Hemphill gave the Lady Eagles a tougher scare but Woodville won in five sets. The football team returns to action this week. The varsity will travel to Winnie Friday night to take on East Chambers. Kickoff is set for 7:30 p.m. This is the district opener for the Eagles. Thursday, the JV will host the Buccaneers at 5:30 p.m., while the middle school will travel. The seventh grade is scheduled to begin at 5:00 p.m. with the eighth grade following. It will be a short week for the sub-varsity as they play Kountze on Tuesday due to the fair. The middle school will be home and the JV will travel. Start times are the same.