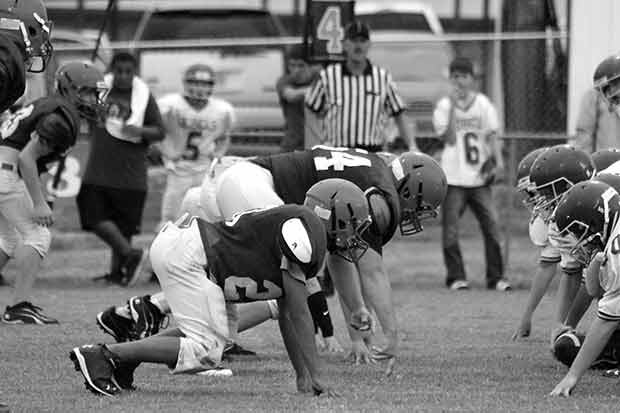 Despite the stormy weather, the Colmesneil Bulldogs defeated the Evadale Rebels, giving them a record of 4-0. The Bulldogs chose to receive after winning the coin toss, and Tyler Walker received the ball, putting them on the 50-yard line. Twelve plays later, Colmesneil's Cody Walsh scored the first touchdown, followed by a two-point conversion. The Rebels then went three and out on offense and were forced to punt. The Bulldogs were put in a great scoring position after Chris Carr made a 72-yard punt return, and Walsh was then able to score a quick three yard touchdown. Evadale began fighting harder, and after steadily advancing to their goal line, the Rebels scored a touchdown pass followed by another successful connection for the two-point conversion, giving them their only points for the night. The first quarter ended with a score of 14-8 with Bulldogs in the lead. "The boys came out on fire in the first quarter," said Coach Fancy Johnson.

The second quarter began with an interception by Kaleb Lindsey, and the excitement continued when Carr made a 23-yard run, followed by a touchdown by Waylon Whitley and another two-point conversion by Walsh. The Bulldogs then struggled to keep up the pace, but after much back and forth play, the boys were able to advance Walsh to the end zone. "We hit a road block in our offense," said Johnson," but with a few half time adjustments, we had a great second half of football." The Bulldogs decided to punt from the 50-yard line, putting Evadale near Colmesneil's goal line. The Rebels then fumbled the ball, and Dylan Falcon made the recovery, scoring a defensive touchdown. Matt Bailey ran the ball in for the two point conversion, putting the final points on the scoreboard. Even through the rain, fans stayed to support the Bulldogs. "We had more fans out in the stands than Evadale did," said Johnson.

The Bulldogs play again on Friday, September 27 against Mount Enterprise for their Homecoming. "Our kids are very excited to play the Wildcats this year," said Johnson. "Last year we played them with a lot of injuries, and we did not come out on top, but we hope to change that this week." Show the Bulldogs support by attending the pep rally at 2:45 p.m. on Friday. Homecoming festivities will begin at 6:45 p.m., and the game will begin immediately after.