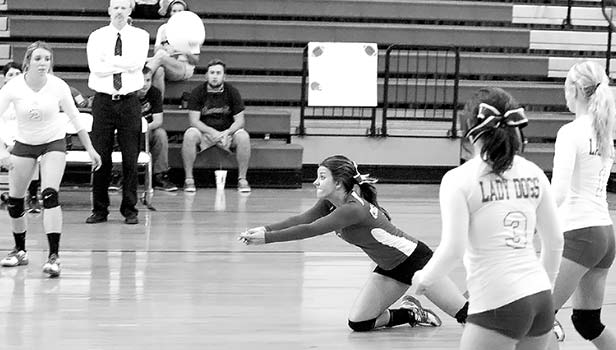 The Colmesneil Bulldogs claimed victory yet again last Friday against the Overton Mustangs. "The kids went into the game very focused and with fire," said Coach Fancy Johnson. The Bulldogs made their initial first down after a penalty on Overton. There was no stopping the Bulldogs from there. Matt Bailey made his first of eight pass attempts, and the Bulldogs gained their first 15 out of 126 passing yards when Harrison Brown made the connection. Three plays later, Cody Walsh made the first touchdown of the night after a 35 yard run. The Bulldogs started defensive play with a tackle for loss by Hayden Langston, assisted by Hunter Rawls. Chris Carr then caused a forced fumble, which was recovered by Justin Fountain. One play later, Bailey made a 34 yard pass to Carr for the Bulldogs' second touchdown of the night. Colmesneil came out hot on defense, forcing their opponents to punt. Carr made the 40 yard punt return that the boys needed to be in scoring position again. Bailey then took the ball to the red zone himself, making a 10 yard touchdown run for the Bulldogs. Shortly after, the Mustangs put their first points on the score board with a 28 yard touchdown pass, followed by a one point field goal kick. Walsh soon returned the favor with another touchdown run.

The second quarter began with an Overton's second and last touchdown of the game. Colmesneil's defense turned up the heat and gave the Mustangs trouble on offense for the rest of the night. "They gang tackled and flew around the ball all night," said Johnson. Garrett Wheat, Fountain and Langston each made a sack; Fountain had two pass break-ups, followed by Kaleb Lindsey with one; and Walsh and Wheat each made a tackle for loss along with Langston's. Zack Bryan was once again the lead tackler for the week with 11 tackles and seven assisted tackles, followed by Justin Fountain with nine tackles, Walsh with seven tackles and eight assisted tackles, Chris Thedford with five tackles, and Langston with four tackles and six assisted tackles.

Colmesneil's offense continued to dominate as Waylon Whitley scored twice with a 52 yard run, followed by a five yard run. Carr then received a pass from Bailey and made a 65 yard touchdown run, followed by Kaleb Lindsey's 60 yard touchdown run. Walsh brought in three two-point conversions for the Bulldogs. The team had a total of 30 carries for 349 rushing yards, and four catches for 126 yards. After an exciting game for the players, coaches and fans, Colmesneil won with a score of 54-15, making the Bulldogs 3-0. "I was very impressed with the kid's showing against Overton," said Johnson. "They have leadership and work together as a band of brothers."

This Friday, September 20, the varsity Bulldogs will travel to Evadale to take on the Rebels. "I am very excited to play Evadale," said Johnson. "They are always well coached, and their kids play hard." Ever since the Bulldogs beat them in the 1960's 91-0, there has been a rivalry between the two teams. The rivalry intensified when the Rebels stole the Bulldog's District Champion title in 2009. "If we win the battle in the trenches, we will win the game," said Johnson. "Their kids are always geared up to play us, and our kids are always ready to play them. It should be a fun matchup." The game will begin at 7:30 p.m.

As of last Thursday, the JV team had one loss under their belt. After a great game against San Augustine winning 28-26, the Bulldogs faced Warren. Unfortunately, the Warrior's were on fire, and the Bulldogs lost 12-27. The junior high team played their first game of the season against Warren, and lost with a score of 6-36. This Thursday both teams will face Evadale at home. After a week of working on mistakes and improving on both sides of the ball, they will be ready for their next challenge. The junior high will play at 5 p.m., followed by the JV at 6:30 p.m.

Last Tuesday, the varsity Lady Dogs played their first district game against the Spurger Lady Pirates. The girls competed with intensity and high energy, and they won three games to zero. "It was a well rounded match, and a good way to start district," said Coach Patrick Sluga. Friday's game did not go as well for the Lady Dogs. The team faced the Chester Lady Jackets, and after five hard fought matches, the Lady Dogs let the victory slip away. "If the ball would have bounced a different way a few times, the results could have ended very differently," said Sluga. Colmesneil won the first match, but their opponents took the second and third for themselves. The girls never gave up, and they were able to clinch the fourth win, but unfortunately the Lady Jackets won the fifth match, taking the victory for the night. "It was a good wake up call," said Sluga, "and it showed the girls that they need to bring their A-game every match." The Lady Dogs will play their fourth district match at home against San Augustine on Friday, September 20. It will be varsity only, and will begin at 4:30 p.m.

The junior high Lady Dogs have competed twice this year. The first match was against Saint Anthony in Beaumont. Considering it was their first time to compete, the girls did really good. The seventh grade team lost 2-1, and the eighth graders lost 2-0. "It was a good experience for both teams," said Sluga. "If we could play them again after having more than six practices, we could beat them." Last week the teams played San Augustine. The results for both teams were the same, but they are still learning and are definitely improving. The girls are playing on a more difficult level than most others as they are serving over-handed. If they keep up the good work, they are sure to come out victorious in the end.

All Colmesneil high school and junior high teams will run in Broaddus on Wednesday, September 18. The varsity girls will run at 1 p.m., and the other teams will follow.

The Lake Tejas Invitational is Saturday, September 21. Sixth grade and under can compete in the fun run for five dollars, and the meet will begin immediately after.