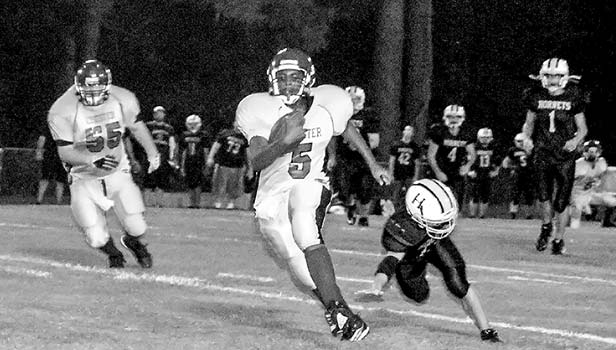 The Yellowjacket football team proved to themselves and their fans just what they can do when they hosted Good Samaritan Fred Friday, September 13. The game began with turnovers by both teams, first by the Samaritans, then the Yellowjackets. The Samaritans had possession of the ball, but the Yellowjacket defense held strong which caused a turnover on downs. Jutty Vaughn ran for 54 yards on five carries to put the Jackets in scoring position. Kris Kuehn completed a pass to Carlos Berry for the first of many Yellowjacket touchdowns. Two quarterback sacks caused the Samaritans to punt. Keaton Whitworth made an exceptional block which allowed Cord Neal to complete a pass to Austin Nowlin who ran 45 yards for a touchdown. Unfortunately, the touchdown was called back due to a penalty. Kuehn intercepted a Samaritan pass to regain control for the Jackets. Kuehn made three carries for 36 yards and J. Vaughn had six yards for a touchdown. The Yellowjacket defense held tough and put continuous pressure on the Samaritan quarter back, but a quick pass led to a Samaritan touchdown making the score 12-6 in Chester's favor. A fourth down 30 yard pass to Bailey Goins put the Jackets at first and goal. The Samaritans recovered a Jacket fumble which allowed them to score. With 1:39 left in the half, Kuehn ran for 21 yards and Vaughn for 20 to score for the Jackets. The half ended in the Yellowjackets favor. The second half began with a touchdown and field goal for the Jackets. The Samaritans were unable to score on the next series of plays. Kuehn was able to complete a pass to Keaton Whitworth who ran deep to put the Jackets within five yards of the goal line, but instead of a Yellowjacket touchdown, a turnover led to a Samaritan touchdown. The Yellowjackets scored three more touchdowns in the second half to close the door on the Samaritans, 50-20. "It is great to get the first win of the season. I feel like we still have to improve to achieve the goals that we have set for ourselves. There were too many turnovers and blown coverages but we played good enough to win," said Coach Fudge.

Chester Lady Jackets started out the week by beating Burkeville in straight sets on Tuesday night. The scores were 25-16; 25-14 and 25-19. The Lady Jackets were led by Timber Wright, Kyrstin Jobe and Destiny Kuehn. Middle blocker Laken Read also had an excellent game defensively and setter Kalee Thomson also had a great game with over 18 sets in the third game alone. The big news of the week came on Friday night, when the Lady Jackets defeated Colmesneil on Colmesneil's own court. Chester outlasted Colmesneil in a very competitive five set match. After losing the first set, 27-25, the Lady Jackets rallied to win the next two sets 25-20 and 25-19. The fourth set went to Colmesneil, 25-21, but the Lady Jackets, with help from the Kyrstin Jobe on the service line, came back to win the fifth set 15-7. Setter Destiny Kuehn had an unbelievable performance for Chester with over 100 sets in the five games combined. Kuehn, Jaci Davis, Kylee Thomson and Timber Wright also boosted the Jackets from the service line. With the two wins this week, Chester moves to 3-0 in district play. "After a grueling week playing in the YMBL in Beaumont last week, I am very pleased with how our team kept their focus and momentum. We have been focusing on making sure that our fundamental skills are sharp, and the girls have responded very well. I'm very excited for what these girls can do if they will continue to grow and work hard in practice," said Coach Hall

The cross country teams participated in the SFA Lumberjack invitational this past Saturday in Nacogdoches. This was a very large meet consisting of 1A-5A schools, with only four 1A schools competing. The varsity girls' team consisted of Kyrstin Jobe, Destiny Kuehn, Kalee Thomson, Kylee Thomson and Donna Martin. These ladies placed 8th as a team. Jobe and Martin both had their personal best times of the season. Kyrstin Jobe and Kalee Thomson placed in the top 25. The varsity boys who competed were Kris Kuehn and Colten Martin who also had personal best times for the season. The junior high girls who participated were Selah Spaulding, Michaela' Langston, Sarah Brown and Ashlyn Overstreet. In this meet the junior high participants ran 3200 meters (two miles). "I thought these young ladies overall ran much better than the Crocket meet," said Coach Barnes. The junior high boys competing were, Dane Barnes and J.T. Martin. Barnes finished 10th overall and Martin ran hard showing improvement. This meet consisted of approximately 30 teams and most of the races consisted of approximately 100 runners. "I was very pleased with our runners," said Barnes.

Up next for the Lady Jackets is a district contest against Spurger on Tuesday, September 17 in Chester at 4:30 p.m. and a non-district game in Chester on Friday, September 20 at 5:00 p.m. against Leggett. The Yellowjackets and junior high Jackets take on Crosby Victory and Praise in Crosby on Saturday, September 21. Game times are 2:00 p.m. and 5:00 p.m.