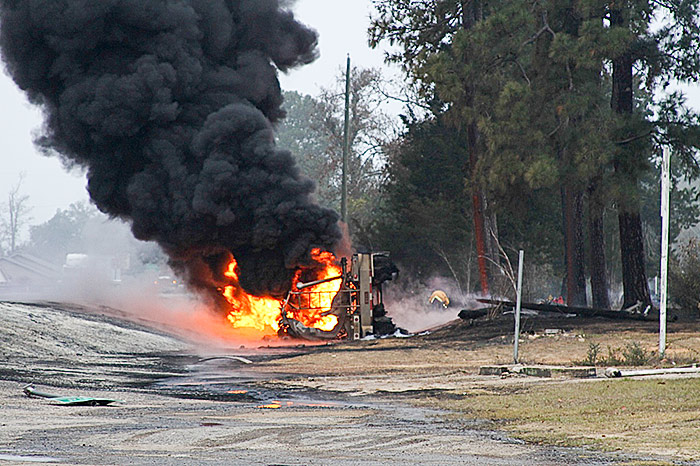 UPDATE_9:30 a.m. - The truck driver has been identified as Burtis "Bucky" Wood from Jasper.

One man died in an early morning rollover accident involving a tanker truck near the intersection of 69 and 1013 in Hillister Friday, November 29. The truck was traveling on Highway

69 toward Woodville early Friday morning when witnesses say the truck misjudged a curve and rolled over into a steep ditch. The truck caught on fire almost instantly, causing some nearby

houses and woods to catch on fire as well.

The driver was not able to exit the truck, and witnesses at the scene could not get close enough to rescue him. It is unknown at this time if the man driving the truck was local or traveling, who he is or even which truck that it is.

All Tyler County Volunteer Fire Departments as well as local law enforcement officials arrived at the scene, and are currently trying to allow all of the oil in the truck to

burn off so they can safely put out the fire. Clean up time for the accident could last for several hours.

No one was injured in the related house fires, and all residents were able to escape.

Traffic is being redirected around the accident, and wait times of up 3 to 5 minutes can be expected.

Updates as we receive more information