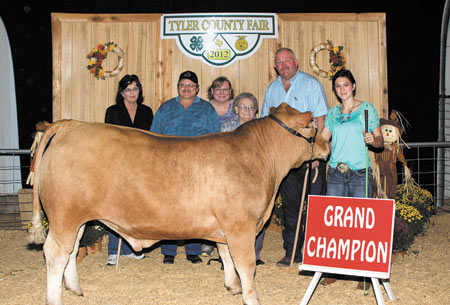 The weather was perfect this year, generally cool and dry, which brought a lot of folks out for both the Carnival and the other Fair activities.

If you've not had a child who participated in the Livestock portion of the Tyler County Fair, you may not know how expensive it is to raise these animals. Because of this expense it would not be possible for many young people to participate in the Fair if not for the folks who buy their animals at the auction each year. The Booster salutes these Buyers and the contribution they make to the young people of Tyler County.

Quinton Cawley had the GC Broiler and received $3,000. Buyers were Community Bank of Warren, Warren Ag., Springfield Pipeline and Anadarco.

Laci Clinard picked up $1,849 for her 7th Place Rabbit. Buyer was Gardner Oil.

James Whisenhaunt had the 12th Place Swine and got $4,999 for his efforts. Buyers were Billie & Stephanie Read, and Texas Equipment.