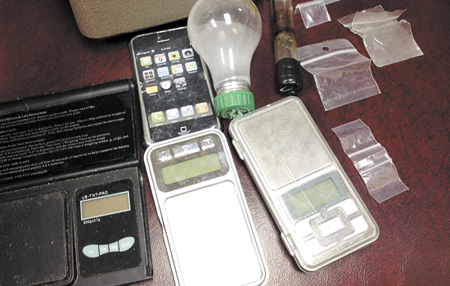 A call September 2 from a man claiming he had been threatened with a gun led Woodville PD Officer John Fuller and Sheriff's Deputy Stephanie Byron to a home in the 1000th block of Pear Street in Woodville and to the arrest of four people at that location on drug related charges.

According to the officers, David Wayne Davis, Jr., 36, of Corrigan told them that the residents at the home threatened him with a gun. When Tyler County Sheriffs Department Officer Stephanie Byron arrived to assist Woodville Police Department Officer Fuller, he saw a firearm inside the home.

Tyler County Sheriffs Department Officer Rene Gutierrez and his drug dog Oso were called to the scene, where a search of the home found various drug paraphernalia, a 9mm handgun and a .308 caliber rifle.

The rifle, it turned out, has been reported to the Webster Police Department stolen in 1988, and was seized by officers. They are currently trying to determine who originally owned the rifle.

Vonica Smith, age 19 of Doucette, Shawn Parish, age 18, of Woodville and Justin Johnson, age 23, of Colmesneil were all arrested at the scene and charged with possession of drug paraphernalia.

During the search of the home, officers noticed that Davis, the original caller, was acting strange. After questioning him, they determined that he was under the influence of drugs and he was also arrested.

"If anyone suspects illegal activity in their neighborhood, please contact your local law enforcement," McCulley said. "Your name will NOT be needed, just your information."