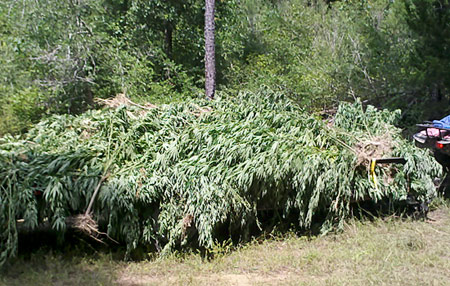 The Tyler County Sheriff's Office, along with the Montgomery County Sheriff's Office, DPS Criminal Investigators and Aircraft Section, Texas Rangers, Texas Forestry Service, Homeland Security, the US Drug Enforcement Agency (DEA), Immigrations and Customs Enforcement (ICE) and other agencies executed one of the largest drug busts in the history of Tyler County on Thursday, July 26.

The agencies executed a search warrant off of County Road 4380 between Spurger and Hillister, which resulted in the arrest of two suspects, Mario G. Vasquez, age 43 of Hillister, and Mario C. Vasquez, age 36 of Houston, and the recovery of approximately 4,700 marijuana plants.

"I've been with the Sheriff's Office for over 20 years now, and this makes one of the biggest busts in this county," says Chief Deputy Clint Sturrock of the Tyler County Sheriff's Office.

The marijuana grows were located in remote locations near a deer lease in a highly-dense thicket of pine and yaupon. The plants had their own water pump systems and 'the grow' was a very large-scale operation. The 'camp' also had its own tents for living quarters and storage areas set up."

There was also evidence that the operation dried and processed the marijuana on location, but sent it elsewhere to be packaged and sold.

Sheriff David Hennigan stated, "It is very likely that none of the marijuana grown at this operation ever touched the hands of any Tyler County citizens or was made available to them. The marijuana was probably taken to Houston for processing to be later distributed throughout the US. Because of the thick canopy created by our forests, this makes for an ideal geographical area for keeping hidden grows such as this, and it is highly doubtful those responsible for such a large operation would allow any local usage of their product grown here."

The marijuana seized during the bust had an approximate street value in excess of four million dollars, but the Sheriff's Office reported that the actual value of the marijuana before it was processed and sold was under a million dollars.

"I am extremely grateful to Montgomery County Sheriff's Office, DEA, and all the other federal, state, and local agencies that came to Tyler County to give us a hand with such a project," says Sheriff Hennigan. "The Texas Forest Service even brought in bulldozers so we could get 4-wheel drive vehicles with trailers into the location; and the Texas Department of Criminal Justice from the Gib Lewis Unit brought in their dogs to assist with tracking down suspects."

"Without serious narcotics investigation, this type operation would have probably continued unnoticed in our county. I know some feel I have been overly aggressive towards narcotics enforcement when you take in consideration the size of our county, but I hope this will send a wake-up call to those who think that way", said Hennigan.

"The investigation is on-going with further arrests expected throughout Texas and other parts of the US", stated Sheriff Hennigan, "and our deputies will also continue to conduct sweeps throughout the area near the seizure to remove any remaining booby-traps."

At this time, both men arrested have been booked in under Possession of Marijuana and each are being held in the Tyler County Jail on $150,000 bonds each, with a hold by ICE as well. All charges will eventually be filed federally due to the number of plants seized; if convicted, both subjects will be facing a prison term of 10 years to life, and a fine not to exceed $1,000,000.