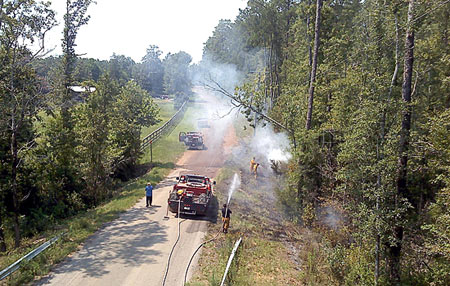 Warren Volunteer Fire Department responded to reports of a brush fire in Warren on Tuesday afternoon and discovered that downed power lines started the blaze.

The blaze began on county road 1325 in Warren, also known as the Warren loop. A few homes were located near the blaze, but the fire department quickly controlled the flames so that it wouldn't spread.

Entergy Servicemen on the scene reported that a green tree fell through the line, and the hot wire laying on the ground started the fire. This is the second fire this summer that began as a result of fallen power lines.