From the Texas Tribune

Governor Greg Abbott announced his third phase on last Wednesday of reopening Texas businesses during the coronavirus pandemic, allowing virtually all of them to operate at 50% capacity.

That is effective immediately, and there are "very limited exceptions," Abbott's office said.

Restaurants were already permitted to be open at 50% capacity. Abbott is allowing them to immediately increase their table size from six people to 10, and on June 12, they can ramp up their capacities to 75%.

Abbott's latest order also brings news for professional and college sports that are played outdoors, letting the former shift from 25% capacity to 50% capacity at their stadiums and allowing the latter to resume for the first time, also at 50%.

"The people of Texas continue to prove that we can safely and responsibly open our state for business while containing COVID-19 and keeping our state safe," Abbott said in a statement.

While the number of cases continues to rise in Texas, Abbott emphasized that the new cases are "largely the result of isolated hot spots in nursing homes, jails, and meat packing plants." Those places made up more than 45% of the new cases over about the last week, according to his office. 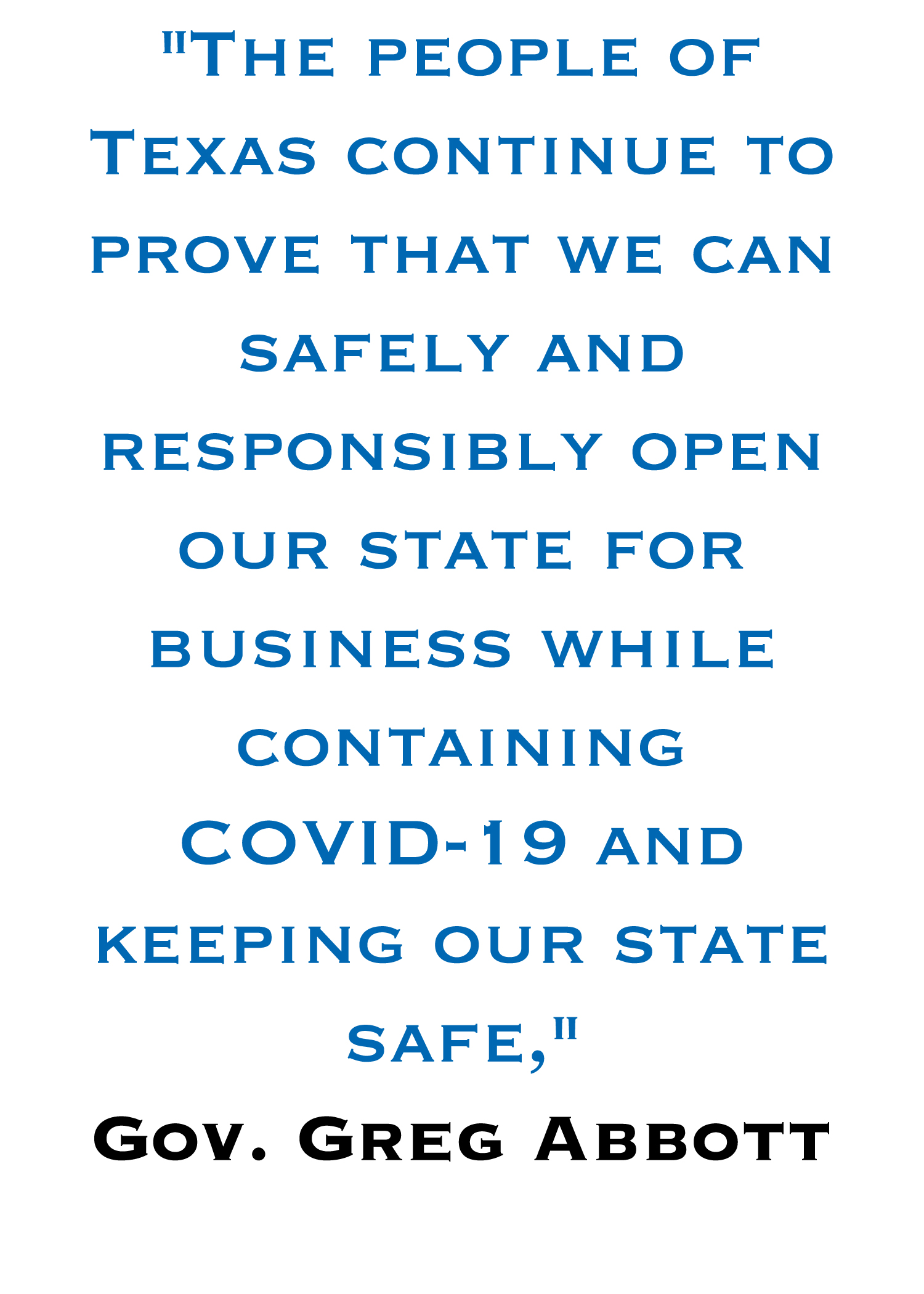 The state's focus on those hot spots has contributed to some of the largest daily case counts over the past week.

"On Monday, Texas saw its highest 7-day average of new cases since the pandemic began," state Rep. Chris Turner of Grand Prairie, who chairs the House Democratic Caucus, tweeted after Abbott unveiled the third phase Wednesday afternoon. "The data are clear — unfortunately, COVID-19 cases are moving in the wrong direction right now and we need to tap the brakes, not step on the gas."

There is fine print to Abbott's latest announcement. Amusement parks and carnivals are among the business that are allowed to immediately operate at 50% capacity — but only if they are in counties with fewer than 1,000 cases. Amusements parks and carnivals in counties with more than 1,000 cases can scale up to 50% capacity June 19.

And bars, which were previously capped at 25% capacity, can immediately go up to 50% as long as customers remain seated.

As he has done before, Abbott gives the state's smallest counties permission to move more quickly in his latest reopening announcement. On June 12, any business in a county with 10 or fewer active cases that was previously open at 50% capacity can increase to 75%.

Texas has now had 68,271 coronavirus cases, including 1,734 deaths, according to the latest data Wednesday from the Department of State Health Services. Over 90% of the state's 254 counties have reported cases.

As of Wednesday, there had been 1,150,868 tests conducted in Texas, the DSHS figures show. While testing has gone up, it is still regularly falling short of the 30,000 tests per day that Abbott had set for reopening the state.

Abbott has also focused on the positivity rate, or the ratio of confirmed cases to total tests. That figure, presented by the state as a seven-day rolling average, dropped from a high of 13.86% in mid-April to between 4% and 6% for most of May. In recent days, however, the figure has been on an upward trend, hitting 8.22% on Wednesday.

Abbott has said in recent weeks that Texans should anticipate temporary increases in the positivity rate as the state dispatches its surge response teams to the three kinds of hot spots: prisons and jails, nursing homes and meatpacking plants.

Another statistic that Abbott has prioritized is the daily number of hospitalizations due to the virus. That trend has not seen any major fluctuations in recent weeks, with the figure ranging between 1,400 and 1,800 most days. It was 1,487 on Wednesday.