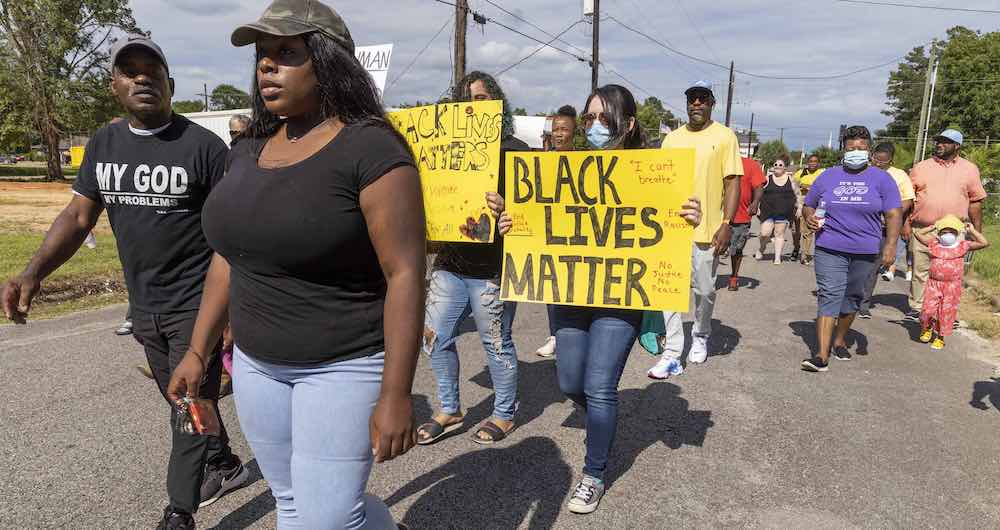 PHOTOS BY JIM POWERS AND CHRIS EDWARDS | TCBParticipants engaged in a peaceful protest and march in Woodville 7 June, 2020. The event was one to celebrate unity and healing, according to organizer Kendall Coleman.

WOODVILLE – Community leaders and law enforcement officers helped kick off a peaceful protest in Woodville on Sunday afternoon.
The event began in the parking lot of the old Movie Gallery building, and participants marched down MLK Drive to the Woodville City Park.

The event was held to honor George Floyd, the Minneapolis, Minn., resident who was killed two weeks ago while in police custody. Floyd, who was raised in Texas in the Houston area, has had an outpouring of public support since his death. A video of the incident went viral online, and police officer Derek Chauvin was subsequently arrested and charged with Floyd’s murder. Three other Minneapolis officers who were on the scene were arrested, as well.

Several demonstrations have been held nationwide, some of which resulting in violence. One of the organizers for the event in Woodville, Kendall Coleman, said the intention was to have a peaceful protest to bring the community together toward the cause of unity.

Coleman made it clear that anyone with “bad intentions” in mind was not welcome to attend. “This is about healing,” he said.
Many of the participants wore shirts that sported anti-racist messages, and some carried signs with statements such as “Black Lives Matter” and “I can’t breathe,” the latter of which has become associated with Floyd, as he was heard making the statement on the video.

The organizers also hosted a trailride the day before, which started in Spurger. The two events were part of what the organizers called “Unity Weekend.”

Participants, most of whom were wearing masks, due to the continuing COVID-19 crisis, took off down the street toward the park following some words from Coleman and Tyler County Sheriff Bryan Weatherford, as well as songs and prayers led by Rev. Bobby Cruse and his daughter, gospel singer/songwriter Kim Cruse.