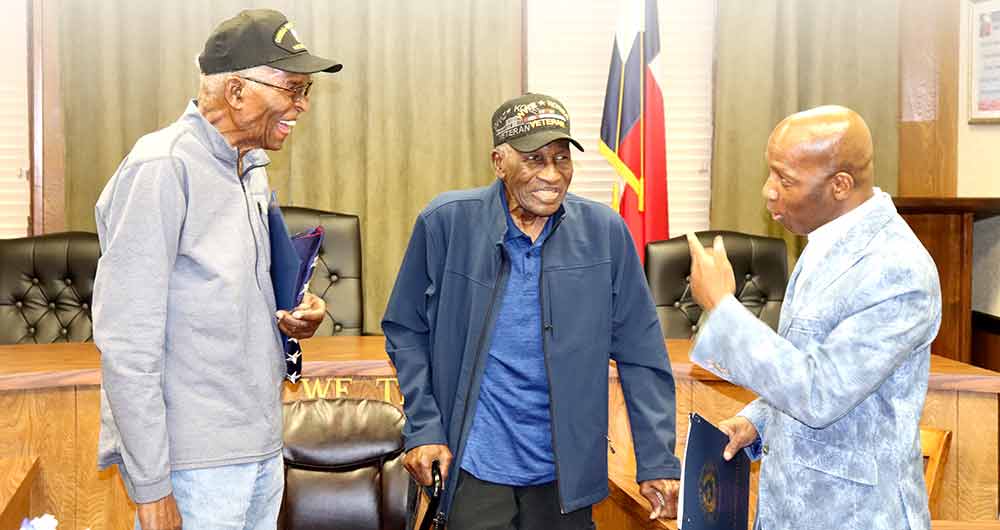 WOODVILLE – With his hat announcing WWII service with the U.S. Army, Alonzo Randolph does not look nearly old enough to have served in that monumental war. One might think the tall, strapping Tyler County resident is sporting the hat of his father or maybe an older brother who might have served.

Randolph, however, just celebrated birthday number 100, and did indeed serve in WWII. He is, as Rep. Brian Babin said, part of “the greatest generation.”

Babin, along with State Rep. James White and workers and volunteers with the county’s Veterans Service Office, helped celebrate Randolph’s birthday and honored him for his service last Tuesday at the courthouse.

Leroy Hamilton, a 95-year-old combat veteran, and friend of Randolph’s, was also celebrated at the courthouse. Hamilton, who served in WWII, as well as Korea and Vietnam, was all smiles and enjoyed conversing with Babin, White and other guests at the event.

Along with a proclamation from Babin’s office and a flag which formerly flew over the nation’s capitol building, Randolph was also honored earlier in the month by the county commissioners court for his birthday.

Randolph, who had several family members with him, spoke with pride of his children and grandchildren, and enjoyed sharing some of his stories with well-wishers.

Babin and White, both of whom are military veterans, each said in their remarks that men like Randolph and Hamilton inspire them. “My hat goes off to you,”

Babin said. White joked that meeting them made him want to go dig out his gunny sack and re-enlist.