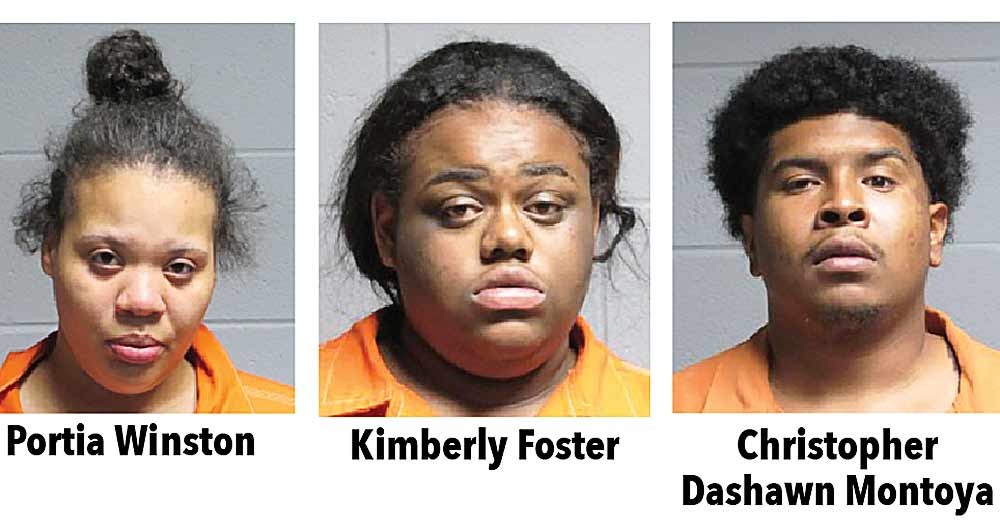 LIVINGSTON — Sheriff’s deputies from Polk and Tyler counties concluded a week-long joint operation Sunday when they arrested three people at a residence off Nettles Cemetery Road on multiple warrants for narcotics, illegal weapons and child endangerment charges, according to a statement released by Polk County Sheriff Kenneth Hammack Monday morning.

Tyler County requested assistance from Polk County’s narcotics detectives with a search for a fugitive with multiple felony warrants.

Earlier attempts by Tyler County deputies to serve arrest warrants on Christopher Dashawn Montoya, 25, of Woodville were unsuccessful. In one of those efforts, Montoya left his two children abandoned in his vehicle — containing illegal narcotics — in the city of Woodville.

Efforts to locate Montoya led detectives to a house on Nettles Cemetery Road off of U.S. Highway 190 East. Officers shared information from the suspect’s Facebook profile that corroborated information that he might be found there.

Early Sunday morning, Polk County deputies arrived at the home to serve the felony warrants. They made multiple attempts to contact the occupants of the residence. The officers reported that those inside came to the door without opening it, locked the door and barricaded themselves inside.

As efforts to contact the occupants continued, deputies saw a firearm and illegal narcotics sitting in open view inside the front seat of a vehicle sitting in the driveway near the front door.

Narcotics detectives arrived on scene and obtained a search warrant for the residence and property.

After they made a forcible entry into the residence, officers found Montoya, Kimberly Foster, Portia Winston and five children. Deputies took Montoya into custody and continued to search the home.

Montoya’s status as a convicted felon bars him from possessing firearms. Illegal narcotics were found throughout the house, and easily accessible to the children.

Montoya was also charged with three counts of unlawful possession of a firearm and six outstanding warrants for his arrest.