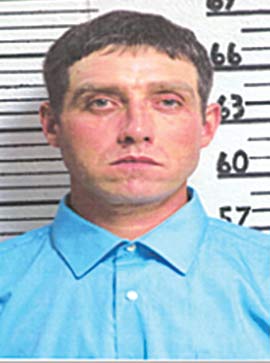 Jason Robert Ferguson, a 34-year-old Colmesneil man, was convicted of possession of meth and sentenced to 10 years in prison last week. Ferguson, according to Babin, had never been convicted of anything despite being arrested more than 20 times in a 10-year period. “Some cases were never prosecuted,” Babin said. He added that after taking office as DA, there were numerous felonies pending against Ferguson. “After reviewing the evidence, it was clear he was a significant meth dealer in Tyler County,” Babin said.

During Ferguson’s trial, which began on the morning of Oct. 31, with District Judge Earl Stover III president, evidence was presented that showed him selling large quantities of meth, including video footage of him at a Tyler County residence with nearly a quarter pound of meth. “The evidence told a long story of a defendant who was causing problems for our citizens and for law enforcement,” Babin said.

During Ferguson’s trial, Babin made it clear that probation was off the table. The defendant had previously pleaded guilty to a second-degree felony possession of meth charge, which carries a punishment range of probation or up to 20 years in prison.

Several of Ferguson’s family members tried to persuade Stover that the defendant should receive probation because he was attending rehab for individuals suffering from behavioral health challenges.

A letter submitted by a state representative asked the court to be open to “a diverse spectrum of responses” when considering Ferguson’s punishment and cited his favorable response to treatment in rehab. Babin said he did not know why the defense would involve a state legislator in the court proceedings. “In my opinion, a ‘health challenge’ would be someone who lost a leg in Afghanistan. Not someone who voluntarily made a career selling meth,” he said.

Ferguson’s last arrest in Tyler County occurred in May of 2018 when deputies with the Tyler County Sheriff’s Office along with two county constables arrested him for outstanding felony warrants for evading arrest with a motor vehicle and theft. At his residence, the investigators discovered that a vehicle parked in the yard was reported as stolen by Jefferson County officials.

A public records search turned up 11 cases filed with the county clerk’s office with Ferguson as the defendant, dating back to 2005.

Ferguson’s sentence is one of several recent lengthy terms handed down in a Tyler County courtroom for meth-related crimes. Babin said recently “We cannot tolerate meth in our county. It ruins lives and inevitably leads to burglaries, thefts, child endangerment and many other crimes. Law-abiding citizens deserve a safe and peaceful community.”