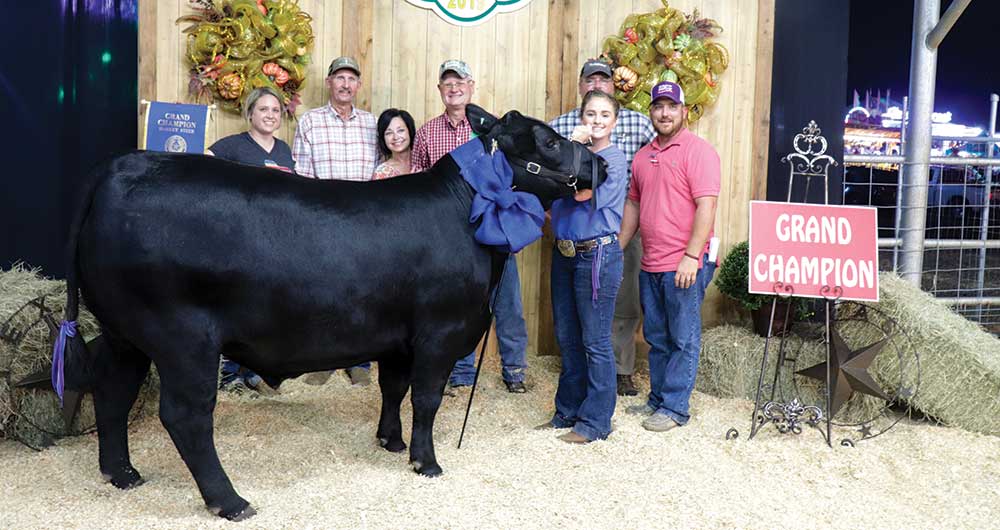 MIGHTY FINE BOVINE – Kaela Hassig of Woodville FFA sold the grand champion steer. The animal fetched $14,000 from a group of buyers. For the complete results of the livestock auction and other events, check out our special fair section in this issue. (CHRIS EDWARDS | TCB PHOTO)

For me, and for many who have grown up in Tyler County, the sight of the Ferris Wheel come to town for that first weekend in October elicits those intense feelings that something special is going to happen.

It really does kick off the holiday season as far as I’m concerned. Of all my Tyler County memories, fair time might be my favorite. Just last week the Tyler County Fair was held, as it has been every year since 1974 at the Clinton Currie 4H/FFA Fairgrounds and Rodeo Arena.

We saw youth from all over the county come out and bring projects they had spent countless hours perfecting. From sewing and fine art projects, to cakes and canning, all the way to the livestock projects that some of these young people have been working on for years, the future of Tyler County could be found right out on Hwy. 190 near the airport.

We saw many examples of success this week: Kaela Hassig of Woodville FFA and Logan Mahaffey of Colmesneil 4H each set a record with the sale of their Grand Champion steer and swine, respectfully. We had several elements of the fair that maybe don’t get as much recognition as the pig show but are nonetheless very impressive.

One of the new shows was in the Home Economics building, where for the first-time students from around the county took part in entering fresh floral arrangements for judging. One of my favorite contests is the barbecue cook-off, sponsored by the Tyler County Go Texan committee, I may have snuck around, and taste-tested several of the teams’ entries, and

I’m glad I didn’t have to pick the winner.

When it came down to Saturday, after every pie had been tasted and every animal project placed the auctions were held. During the afternoon the Home Economics Auction brought every project the maximum amount, and almost $6,000, and then Saturday night nearly $300,000 was spent on livestock projects which had made the sale. When all was said and done the youth of Tyler County were able to take home more than $319,000 for projects raised or produced for the fair.

As impressive as it is for our young people, the fair brings out the best in our community as well. There are countless volunteers who give of their time to make the fair the very best time of the year. Often times it is those same volunteers we see Saturday reaching into their own back pockets to donate and support young people financially. The people here are special, that’s a fact. There wasn’t a single person who kneeled on Saturday night when the “Star-Spangled Banner” was sung; no one objected when nearly every livestock show was opened in prayer and you couldn’t find better sportsmanship in any stadium as what took place at the fairgrounds this weekend. Win or lose, our young people showed off class and what it means to compete with honor.

There are many things that make Tyler County a special place, the rolling hills of Colmesneil, the countless memories made along the river and on backroads throughout the county, but the thing that makes Tyler County truly unique is the quality of people. I can’t thank the people of Tyler County enough for the privilege to serve them, and weeks like Tyler County Fair Week remind me about what a truly special place this is.