WOODVILLE – A Chester man was sentenced to 25 years in prison on multiple felony offenses last week. 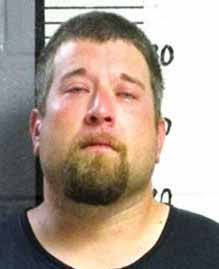 Jarred Wesley Davis was sentenced in a Tyler County courtroom on Monday Sept. 23 for delivery of meth, burglary of a habitation and numerous other charges.

Davis was arrested in May when a deputy with the Tyler County Sheriff’s Office responded to a home security alarm at a residence west of Colmesneil, on FM 1745.
The deputy spotted Davis, who fled into the woods, and arrested him after a brief pursuit on foot. During the investigation, Davis was found to be in possession of crystal meth and numerous stolen items from the home.

Babin said that Davis had also fired several holes into the side of the home, in an attempt to shoot a security camera.

According to Babin, nine days prior to that arrest, Davis had pleaded guilty to a separate burglary, which he had committed in December 2017 in Colmesneil. He was free from jail on bond and awaiting a sentencing trial.

During the 2017 burglary, Babin said Davis had fled into the woods on foot, but his vehicle remained at the scene of the crime, and when investigators searched it, they uncovered crystal meth and several items of drug paraphernalia.

Davis was also wanted, in 2018, for the theft of a commercial-size zero-turn mower, which was stolen from the Corrigan Youth Baseball Association, according to a Polk County Crime Stoppers bulletin from the time.

“I appreciate the hard work of Assistant Prosecutor Pat Hardy and the hard work from the Tyler County Sheriff’s Office,” Babin said. “Without their efforts this case would not have been resolved.”