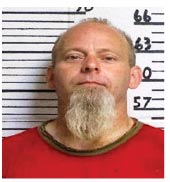 WOODVILLE – A Tyler County jury handed down a 17-year sentence to a Woodville man last week. The sentence is one District Attorney Lucas Babin said, “sends a strong message” that county residents “have no tolerance for meth.”

Christopher George Tubb, 47, was given the sentence for possession of meth. He will serve his sentence in the Texas Department of Criminal Justice: Institutional Division.

Tubb’s day in court came last Tuesday. During the trial, Babin and First Assistant DA Pat “Hawk” Hardy presented evidence to the jury from a November 2018 arrest. The arrest occurred within the Woodville city limits. Tubb was stopped for an expired registration sticker by Woodville PD Officer Steven Hoke.

During the stop, Tubb, whom Hoke recognized as a habitual offender for driving with an invalid license, refused to produce identification or to roll down his window or exit the vehicle he was driving.

A search of the vehicle produced a baggie containing approximately 14 grams of crystal meth. The jury heard comments from Adam Park, a special agent with the Texas Department of Public Safety, who said the amount of meth confiscated from the vehicle is a sufficient quantity for anywhere from seven to 28 people to obtain a high.

In addition to Park’s testimony, the jury also heard from Tyler County Sheriff’s Office deputy Garret Nalley and narcotics officer Simon Prince, both of whom testified to previous incidents where Tubb refused to produce a valid driver’s license when stopped.

Babin expressed gratitude to local law enforcement and to DPS for their hard work and cooperation in apprehending Tubb. “Without their efforts, this offender would still be on the street buying and likely distributing meth,” he said.

Tubb’s most recent arrest in Tyler County happened in June, when according to Sheriff Bryan Weatherford, narcotics deputies patrolling along FM 1746 stopped him for a traffic violation. Tubb remained in the vehicle with the window up.

“After several minutes of talking with Tubb, deputies ultimately had to break the driver window to take Tubb into custody,” Weatherford said.

After sentencing, Babin said the guilty verdict and sentence “shows that the citizens of Tyler County are tired of meth ruining their communities.”

“The jurors had a wide range of punishment to choose from, which included probation. Seventeen years sends a strong message,” he said.
Tubb was booked into Tyler County Jail to await transfer to a TDCJ facility.