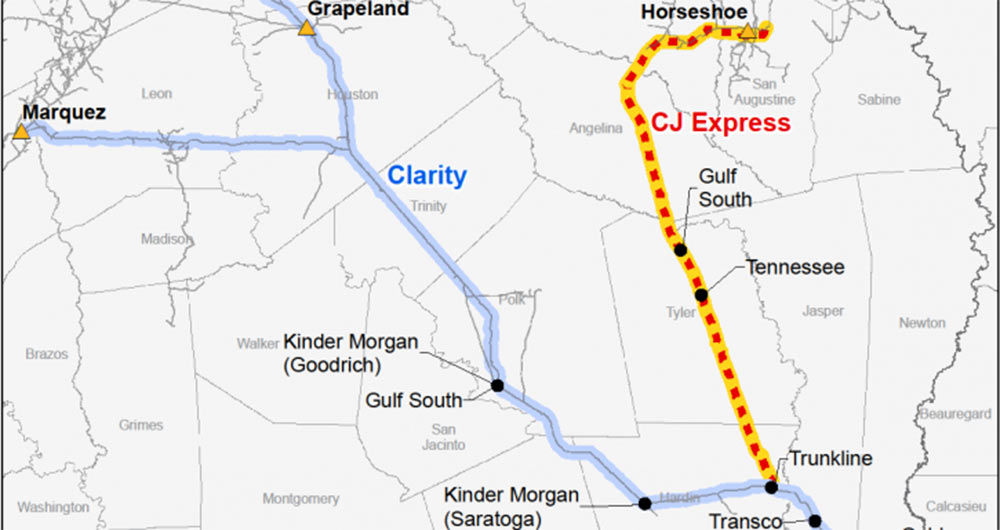 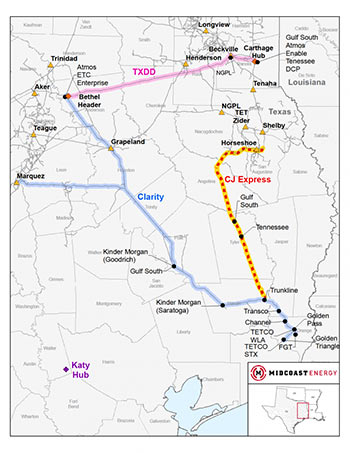 Plans for a natural gas pipeline projected to cross Tyler County indicate it will be completed in early 2021.

The project, which is dubbed the CJ Express, is an expansion project, which according to Midcoast Energy, LLC, is designed to provide the transportation of natural gas supplies from East Texas to the Houston Ship Channel and Gulf Coast markets.

The pipeline will include up to 107 miles of 36-inch pipe and run through six counties, from Shelby County into Hardin County. It will also include a 39,000-horsepower compressor station, according to a Midcoast news release.

When it was first announced last year, the route of the pipeline was to include up to 150 miles, commencing near Carthage in Panola County, but the most recent information available confirms a shorter projection.

The Houston-based Midcoast secured an undisclosed anchor shipper for the project in April, according to a news release. The most recent project summary states that construction is estimated to begin later this year, with right of way acquisition having already begun.

In the state of Texas, pipelines are not required to be permitted before being built, according to the State Railroad Commission. The Commission has authority over intrastate pipelines for safety and rate regulation but does not have the authority with respect to eminent domain powers.

“Generally speaking, common carrier pipelines in Texas have a statutory right of eminent domain,” according to a document on the RRC website. The RRC defines a common carrier pipeline as one used to transport oil, oil products, gas, carbon dioxide, salt brine, sand, clay, liquified minerals or other mineral solutions.

According to an article in the Oil and Gas Journal, Midcoast is the largest gathering and processing system in the East Texas basin and has “recently seen volume growth with increased production from the East Texas and Louisiana Haynesville shale.” The CJ Express is designed to be incorporated into Midcoast’s existing East Texas system.

Statewide, natural gas production has risen largely over the last decade, and Texas has led the country in the gas market, with more than 8.8 million cubic feet of natural gas produced in 2018, according to statistics from the Railroad Commission. The oil and gas production market is also a major contributor to the Texan economy, with 325,439 workers, or 39 percent of the national oil and gas jobs, according to the most recent figures from the Texas Workforce Commission.