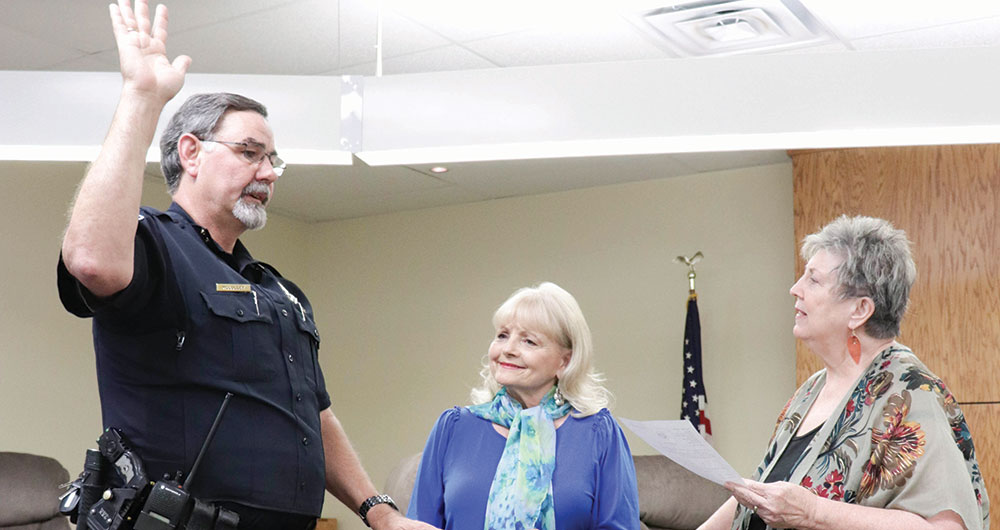 Mike McCulley receives the oath of office from Municipal Judge Judith Haney to become Woodville’s new chief of police. McCulley’s wife Betty (center) was on hand, along with several other family members, to help him celebrate his new title and to hold the Bible used for the swearing-in. (CHRIS EDWARDS | TCB PHOTO)

McCulley said he is glad to “embrace the opportunity to do the job” after he was sworn-in by Municipal Judge Judith Haney.

“I’m humbled to take on this challenge,” he said. “Our department has accomplished so much under Scott’s leadership.”

McCulley said he plans for Woodville PD to continue to be as efficient as possible in the 21st century.

Another law enforcement appointment was announced at Monday’s meeting. Steven Hoke will replace Bubba Sheffield as the on-campus school resource officer at Woodville ISD. City Administrator Mandy Risinger said the package of salary and benefits for the position was re-evaluated and adjustments have been made for compensation. These adjustments are pending approval by the Woodville ISD Board of Trustees.

Haney congratulated Hoke on his pending appointment and called Sheffield “someone who really cares about the kids,” a quality she said Hoke also embodies.
Resolution passed in support of HR 759

Mayor Paula Jones introduced a resolution for the city of Woodville to support the Alabama-Coushatta Tribe and the efforts for HR 759 to pass.

Jones spoke of several ways in which the tribe has contributed to the Woodville community, and of how the Naskila Gaming venue has proven beneficial for the local economy as well as with job creation. The resolution was passed unanimously.

Horse ordinance passed
An ordinance pertaining to the riding of horses within the city limits was passed on Monday night. The ordinance states that riding horses is prohibited, with exceptions granted for events such as Western Weekend.

The ordinance was created following consideration by a committee formed last fall to address the issue after an initial ordinance was deemed insufficient for the city’s needs.

The expansion, which Ballard Johnson, the president of Castle Pines Mobile Home Community MHC LLC, said will include 14 additional units, will help further meet the need of affordable housing within the community. Currently there are 37 sites at the location.

Other Business
Approval was made to appoint Jones as the city’s representative to the Deep East Texas Council of Government’s Board of Directors.