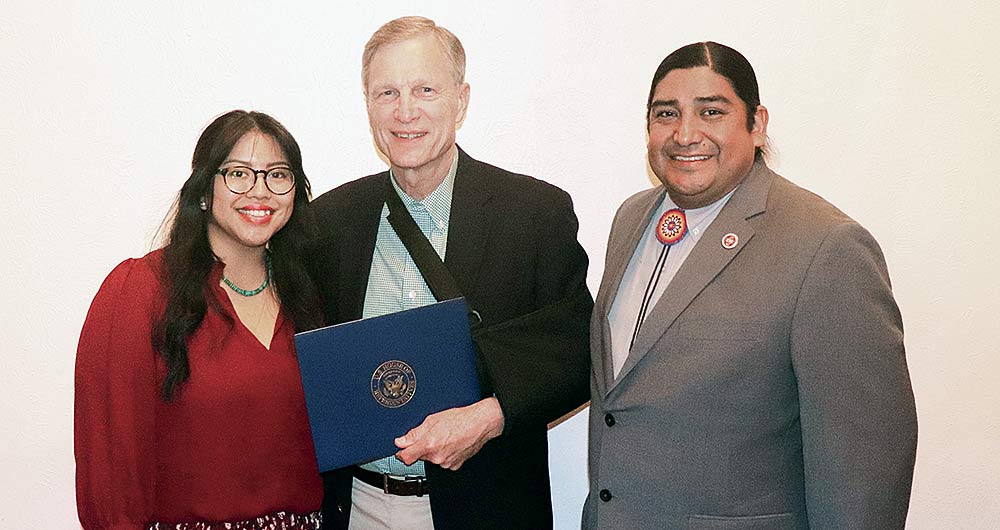 Congressman Brian Babin (R-Woodville) presents an award to Emma and Elliott Abbey of the Alabama-Coushatta Tribe at the annual Tyler County Chamber of Commerce Banquet last weekend. Babin has supported the tribe and its efforts to keep its Naskila Gaming Center open. (JEFF FATHEREE | TCB PHOTO)

By Greg Peak
This email address is being protected from spambots. You need JavaScript enabled to view it.

NEW ORLEANS, La. – Although Naskila Gaming will remain open for the time being, a three-judge panel of the U.S. Court of Appeals for the Fifth Circuit has affirmed a lower court order closing the Alabama-Coushatta Tribe of Texas’ gaming facility.

The tribe has announced it will appeal the decision, which will allow the facility to remain in operation at least until a decision is made on that request.

“The Alabama-Coushatta Tribe will file a petition to have our case heard by the entire Fifth Circuit. We stand ready to appeal any adverse ruling to the United States Supreme Court as well,” Tribal Council Chairperson Cecilia Flores said Monday.

“There are 371 full-time jobs at stake, and we have a moral obligation to fight for every one of the people working at Naskila Gaming. Our alcohol-free facility is making a significant difference in the lives of East Texans and we will continue to pursue every legal avenue to continue operating Naskila Gaming on our Tribal lands.

“Naturally we are disappointed by the ruling of the three-judge panel, but the Alabama-Coushatta Tribe remains committed to protecting our sovereign rights and the people whose livelihood depends on this facility,” Flores added.

In a ruling filed Thursday, March 14, in New Orleans, La., the three-judge panel ruled the federal district court in Beaumont did not abuse its discretion when it ruled against the Tribe last year.

That February 2018 ruling came during a federal lawsuit filed against the Tribe by Texas Attorney General Ken Paxton challenging their authority to operate electronic bingo games at their Naskila Gaming facility on the reservation east of Livingston.

In that decision, the district court judge ruled provisions of the Ysleta del Sur Pueblo and Alabama and Coushatta Indian Tribes of Texas Restoration Act supersede the Indian Gaming Regulatory Act (IGRA). The Restoration Act is the 1987 law which created the federal reservations for both the Alabama-Coushatta in Polk County and the Ysleta del Sur Pueblo (also known as Tigua) near El Paso.

The two laws are in conflict in that the IGRA allows gaming on Indian reservations nationwide while the Restoration Act prohibits it on the Alabama-Coushatta and Tigua reservations in Texas.

In the district court ruling, the judge ordered the gaming facility to be closed, but granted a stay to allow it to continue to operate while the ruling was being appealed to the 5th Circuit Court.

In addition to the proceedings now underway in federal court, U.S. Rep. Brian Babin has introduced legislation in the U.S. House that would settle the conflict between the two laws. H.R. 759, the Ysleta del Sur Pueblo and Alabama-Coushatta Tribes of Texas Equal and Fair Opportunity Settlement Act would give both the Alabama-Coushatta the Tigua the authority to offer limited gaming on their federal reservations.

The bill has been sent to the House Natural Resources Committee for review, which on Feb. 12 referred it to the Subcommittee on Indigenous Peoples of the United States.

As of Monday, of the bill’s 21 co-sponsors three were members of the subcommittee, including its chairman Ruben Gallego (D-Ariz.), Don Young (R-Alaska) and Aumua Amata Coleman Radewagen (R-American Samoa). In addition, two other co-sponsors, Jennifer Gonzalez-Colon (R-Puerto Rico) and William Lacy Clay (D-Mo.) are members of the full Natural Resources Committee.

Because Radewagen and Gonzalez-Colon do not represent states, they are classified as delegates and may not vote on the floor of the House. However, they are allowed to introduce legislation and fully participate – including vote – on the committees and subcommittees to which they are assigned.

A total of 10 members of the Texas delegation have signed on as co-sponsors including Republicans Will Hurd of Helotes, Michael Conaway of Midland, Randy Weber of Friendswood, Lance Gooden of Terrell, Dan Crenshaw of Houston, as well as Democrats Henry Cuellar of Laredo, Filemon Vela of Brownsville, Vincente Gonzalez of McAllen, Veronica Escobar of El Paso and Sylvia Garcia of Houston.