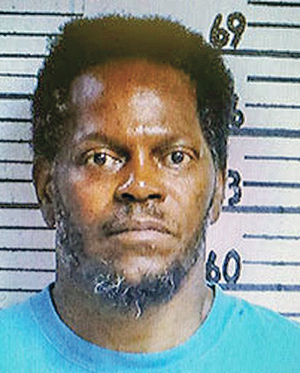 Calvin FearsWOODVILLE – Quick thinking, experience and ace police work came together to result in the apprehension of an armed robbery suspect last Friday in Woodville.

At approximately 1 p.m., a man entered Security Finance, located in the 100 block of South Magnolia. The two employees working inside recognized him, despite the mask and gloves he wore. His voice and eyes gave away his identity, according to Woodville Police Sergeant Jathan Borel. “I believe he was a customer of theirs at one point.”

The man, who was identified by the witnesses as Calvin Fears, Jr., 53, of Doucette, also brandished a firearm and demanded the employees to step away from the desk. Fears is alleged to have emptied the cash register and then ordered one employee to give him her car keys.

When 911 dispatchers put out a description of the stolen vehicle and its license plate number, Woodville Chief of Police Scott Yosko happened to be out patrolling. The suspect had fled southbound and Yosko observed the vehicle near the corner of Cardinal and Bluebird streets. He also observed a suspect matching the description given by dispatch entering a residence near the 800 block of Bluebird, according to Borel.

Yosko promptly called for backup and when officers made entry into the residence, they found the suspect hiding in the attic, along with the clothing, handgun and gloves worn during the robbery.

Borel said it was approximately 10 minutes between the time the 911 call was logged and the suspect was seen. “Chief Yosko is really good at knowing where to be and what to look for,” Borel said. “He’s been doing this for 40 years and we’ve all learned so much from him in that regard. Chief was in the right place at the right time.”

The stolen money was also recovered. Borel said he didn’t have an exact dollar amount, but employees indicated it was about $500.

Fears was arraigned by Woodville Municipal Judge Judith Haney and a no bond was set. He is awaiting a mental health evaluation. Jail booking records show that Fears is not in custody of the Tyler County Jail as of Tuesday morning. He is charged with aggravated robbery, a first-degree felony and unauthorized use of a motor vehicle.

Borel credited Yosko’s experience and the work of fellow officers for handling a potentially dangerous situation.