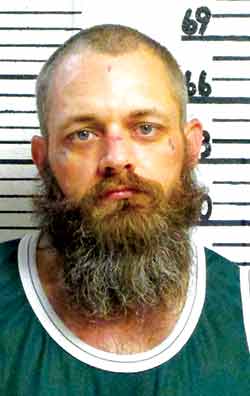 Joshua Allen RileyWOODVILLE – A Woodville man was sentenced to 25 years in prison last week on a drug possession charge.

Joshua Allen Riley, 35, was found guilty on Tuesday, Sept. 11. Riley stood trial in Woodville and was tried in the District 1A court with Judge Delinda Gibbs-Walker presiding.

The trial, which began on Monday, Sept. 10, was prosecuted by Tyler County District Attorney Anne Pickle and Assistant DA/DA Elect Lucas Babin. Riley was represented by Bobby Williams of Livingston.

The charge Riley was found guilty of was from a June 22, 2016 arrest for possession of a controlled substance penalty group 1 > = 4 grams but < 200 grams, a second-degree felony. It took jurors about half an hour to arrive at the verdict, according to Pickle.
Three witnesses were called by the prosecution to testify during the trial and following the guilty verdict, Riley asked for a punishment offer that would include all of his other charges to run concurrent with the 25-year sentence he received.

The other charges include one for debit/credit card abuse, for which he received seven years; another drug possession charge, which was a state jail felony and got him two years. He also received seven years for a bail jumping case. In total, the 16 years for the three cases will be served concurrent with the possession charge for which he was tried.

Following the trial, Riley was taken into custody by the Tyler County Sheriff’s Office to await transfer to a Texas Department of Criminal Justice facility.