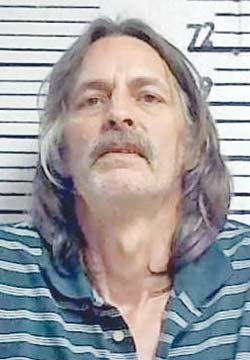 Deputies with the Tyler County Sheriff’s Office arrested Brian Bevelhymer, 51, of Warren, in the Fred area. On Tuesday afternoon, TCSO received a tip that a man matching

Bevelhymer’s description was seen walking on FM 1943 East in Warren and had been picked up by a passerby headed toward Fred.

Deputies in the Fred area were able to locate the vehicle with the caller’s assistance, as the caller followed the vehicle.

When the deputies initiated a traffic stop on the vehicle, the suspect provided them with a false name.

TCSO began searching for Bevelhymer on Friday, Aug. 17 when he allegedly removed his ankle monitor and took off. Bevelhymer was indicted on a felony aggravated sexual assault of a child charge from an April 2017 incident. According to TCSO he was out on bond and required to wear the ankle monitor as a condition of the bond.

Bevelhymer is currently in the Tyler County Jail on charges of Aggravated Sexual Assault of a Child/Violation of Bond and Fail to Identify: Fugitive from justice.

In a post on its Facebook page, TCSO said it would like to thank everyone who assisted by sharing a post about Bevelhymer that went out on Friday, providing tips and reporting possible sightings.