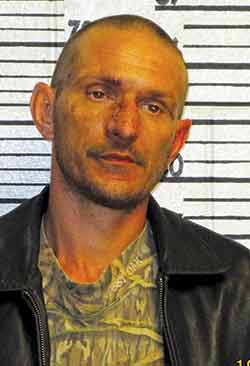 Ronnie BankstonA Colmesneil man is being held without bail at the Tyler County Jail after he fled from officers attempting to interview him as part of a theft investigation Saturday morning.

Tyler County deputies went to a home on CR 4094 at about 9:25 a.m. Saturday, May 26, to speak with Ronzie Bankston, 39, of Colmesneil. As the officers got out of their patrol vehicle, they saw a white male run away from the residence, ignoring their orders to stop.

Deputies pursued the suspect on foot as he ran across CR 4094 and into an abandoned house. As he entered the house, the man tripped and fell. On the ground, he began kicking and struggling against the deputies. He was handcuffed after a brief struggle.

Bankston also had two outstanding warrants for his arrest, a motion to revoke his probation for having a prohibited substance in a correctional facility, and failure to appear in court on that charge.