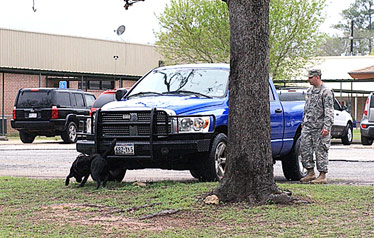 A search dog from Fort Polk spent part of the day at Chester ISD because of a bomb threat early Friday morning. According to Don Campbell, program director for KETX Radio station in Livingston, a female caller threatened the following Polk County Schools: Big Sandy, Onalaska, Corrigan, Leggett and Goodrich. Campbell said Polk County Sheriff's Department is having the radio station trace the phone records in an effort to find the caller.

Chester ISD was also listed in the threat and Tyler County Sheriff's department responded to the school immediately. According to Tyler County Sheriff David Hennigan, as soon as Chester superintendent Kenneth Graham received the information, the students were evacuated to a safe location according to protocol set up by the school district. "We did an extensive search of the entire school," said Hennigan, "A Texas Ranger from Lufkin assisted, along with our deputies, constables and the superintendent."

The caller who made the threat specifically said "at 1:20 p.m.", so the Sheriff's department had the school disengage the school's alarm/bell system until everything was searched and 1:20 p.m. had come and gone. "The school set the alarm/bell system again for a check as a final precaution," said Hennigan.

In spite of the serious situation, Chester students enjoyed food brought in by McDonalds and Brookshire Bros. while waiting in their safe location for parents to pick them up.