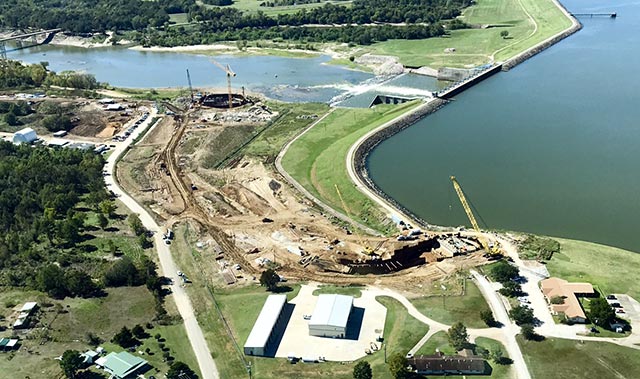 Operations remain on hold at the Hilton Lively Renewable Power Project in Woodville, a consequence of a massive drop in natural gas prices.

East Texas Electric Cooperative (ETEC) — a group obtained a permit from the Federal Energy Regulatory Commission in May 2012. ETEC contracted with Gemma Power Systems to build and operate the 50-megawatt biomass power plant for three years — a contract that expired Dec. 31, 2017. EthosEnergy now handles operations at Lively as well as ETEC's other generating facilities.

When ETEC was engaged in the planning and permitting stages for the Lively Plant and the hydroelectric plant currently under construction at the Lake Livingston dam, natural gas was selling for $4.17 to $5.97 per BTU.
Gas prices plummeted from 2014 through 2016, bottoming out at $1.77.

When trading ended Tuesday, gas futures were selling for $2.835 a BTU — still a substantially lower cost than producing it at Lively.

For 2018, ETEC is focused on bringing the hydroelectric plan online by 2019. The co-op has had limited conversations about retooling the Lively plant to produce electric with natural gas.

"We don't anticipate operating the Lively plant any time soon. Unless there's a fundamental change in the power market, I don't see us bringing it online," Thomas said. "Right now, we have more capacity than we need," he added. "It's absolutely an operation if we need additional power."

They currently operate peaking plants in Hardin County and San Jacinto County. During the recent spate of freezing weather, ETEC was operating three out of the four peaking plants at all times.

EthosEnergy operates two 75 megawat turbines at each of those facilities that went into operation in 2009 and 2010. Their role is to produce additional electricity during periods of extreme cold or extreme heat. With EthosEnergy now maintaining the plant in Woodville, ETEC can achieve some economies of scale, Thomas said.

At its peak, the Lively plant employed 29 workers. Currently three full time staff members are assigned to the Woodville site.

Construction at the Lake Livingston plant is now back on track after losing about three weeks of work due to the flooding that followed Hurricane Harvey.

Thomas and L.A. Williams, project manager for the R.C. Thomas Hydroelectric Project at Livingston, applauded construction crews for how quickly they were able to get back on track after the record flooding.

That facility is on schedule to begin generating electricity in June 2019.