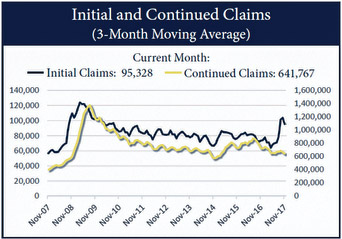 While a record low unemployment rate was set this month for the state of Texas as a whole, an analysis of the latest report from the Texas Workforce Commission shows Tyler County's jobless rate remains 2 percent higher than the rates announced for Texas (3.38 percent) and the U.S. (4.1 percent).

The latest Tyler County rate (based on November data) was calculated at 6.4 percent, up from 5.9 percent the previous month.

That higher rate was accompanied by shrinkage in the labor force. TWC reported 6,957 workers were ready and able to work in November, but only 6,509 had jobs. In October, the Tyler County workforce included 6,997 workers with 6,583 employed. The number of unemployed rose from 414 to 448 in one month.

Those numbers are slightly better than October – November 2016 when unemployment rose from 7.3 to 7.9 percent. The workforce saw some similar shrinkage with 7,130 workers in October and 7.096 in November. Since October 2016, the county has shed 102 jobs.

Additional data released in the last week from TWC shows that the average weekly wage at $720, continuing to trail the statewide average by about $300 a week. The local average is up $15 a week for the preceding year, but dropped $19 below the last report which covered the second quarter of 2017.

"The addition of 330,600 jobs over the year demonstrates the consistency with which employers in our state create job opportunities for the highly skilled Texas workforce," said TWC Chairman Andres Alcantar. "The Texas economy offers employers access to a competitive workforce and provides job seekers with career options in a variety of growing Texas industries."

Nine of eleven major industries showed increased growth in November, including Professional and Business Services with 14,700 jobs added and Construction which added 8,200 positions. Leisure and Hospitality employment continued to grow by adding 8,000 jobs in November.

"Private-sector employers added 52,000 jobs in November and have accounted for the addition of 294,600 positions in Texas over the past year," said TWC Commissioner Representing Employers Ruth R. Hughs. "I am encouraged by the growth across a variety of industries and commend our employers for their investment in our Texas workforce."

The Amarillo and Midland Metropolitan Statistical Areas (MSA) recorded the month's lowest unemployment rate among Texas MSAs with a non-seasonally adjusted rate of 2.6 percent, followed by the Austin-Round Rock, College Station-Bryan and Lubbock MSAs with a rate of 2.7 percent. The San Antonio-New Braunfels MSA registered a rate of 3.0 percent for November.

"Employment demand continues to be high in well-paying industries such as Manufacturing, Construction, and Mining and Logging," said TWC Commissioner Representing Labor Julian Alvarez. "I encourage career exploration in these and other industries that are growing in Texas. TWC's labor market information tools and products are designed to inform, prepare and advance our Texas workforce. Visit a Workforce Solutions Office to find out more about the latest employment opportunities available."