By Valearie Reddell
This email address is being protected from spambots. You need JavaScript enabled to view it. 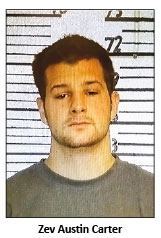 Woodville Police Officer Steven Hoke was called to the 1300 block of South Magnolia a couple weeks ago to meet with a homeowner who reported items had been taken from his garage. Among the missing items were generators, tackle, tools, car keys and cash.

The victim told Hoke he had been away from home for a week, so he could not pinpoint the date and time when the break-in occurred.

Hoke contacted pawn shops in the area in a search for any of the missing items but found nothing.
The victim called back 10 days later and said the burglar had struck again. However, during the intervening days the homeowner and purchased and installed security cameras which captured images of a male subject entering a storage building on the property.

The suspect used key fobs he located during his second visit to the garage and used them to remove items from two vehicles on the property.

Hoke recognized the suspect from prior interactions, and knew he lived in the apartment complex nearby.

Coincidentally, the day before the burglary was reported, Officer Zachary Zachary was called to those apartments to investigate two suspicious boxes that contained portable generators. The boxes were sitting outside the door of the apartment where the suspect lived.

Officers obtained a search warrant from Judge Judith Haney which was executed Nov. 26.

Inside the apartment officers recovered additional property from the burglary and seized it as evidence. They also discovered several items of drug paraphernalia during the search.

The suspect had apparently smoked marijuana just prior to officers' arrival and fell asleep as officers conducted their search.

He remains in custody at the Tyler County Jail.