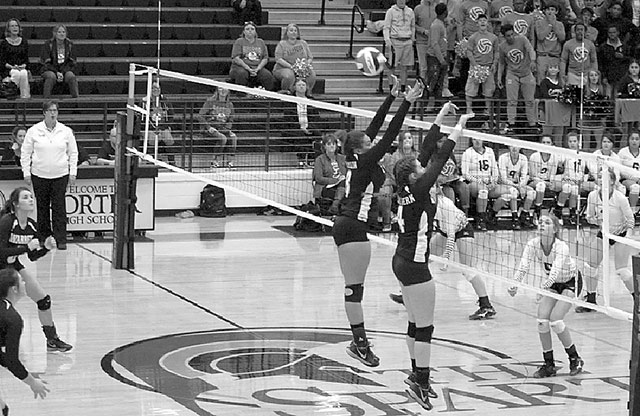 For the second year in a row the Lady Warriors volleyball team entered the playoffs as the third seed and had to face Brazos in the first round. Last year, the Lady Warriors fell to the Lady Cougars in three sets and unfortunately this year they saw that same fate. Even though the Lady Warriors were not at the top of their game in the first set, falling 25-8, they quickly got it together for the other two sets but came up just a bit short on the scoreboard. Warren tied the second set early 8-8, as Bailey Hamilton had two blocks and a kill, Lindi Barnett with an ace and Claire McEachern with a kill.

The Lady Warriors stayed behind the rest of the set, but only by a couple of points until Brazos strung together a short run to take a 22-15 lead.

Erin Foster hit a winner, Samantha Marlar an ace, and Hamilton a block to get within five; but Brazos was able to put the set away 25-19.

The third set, led by Laikyn Bell, McEachern, Barnett, and Hamilton with kills, helped give the Lady Warriors a 15-12 lead. Hamilton's block and an ace by Taylor Renick pushed the lead to 18-13 before the Lady Cougars started to make their run.

Four unforced errors by Warren and good serving placement by Brazos resulted in the Lady Cougars tying the game at 19. Brazos took the lead 23-20, when McEachern hit a winner and Hamilton a block to come within one at 23-22. Unfortunately for the Lady Warriors, Brazos secured the set and the win with the next two points, sending the Lady Warriors home for the second consecutive year. Warren is proud of these young ladies and all they accomplished this year. Good luck to all the seniors in the future.

The Warriors varsity football team traveled to Buna last Friday to take on the Cougars but were turned away 45-6. The last game of the season will be home (senior night) against Kountze Friday November 10 at 7:30 p.m.