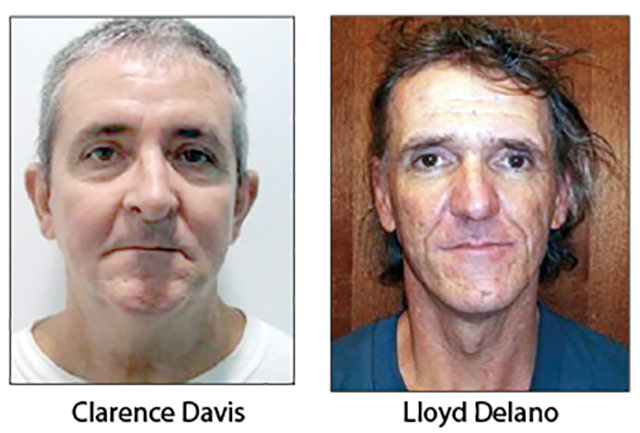 Two men who have been ordered to report information about where they live and work to law enforcement officials face additional felony charges for failing to comply with mandatory sex offender registration requirements.

Pct. 3 Constable Tony Reynolds performed a routine compliance check on sex offenders living in Pct. 3 on Sept. 28. During that check, Reynolds discovered that two men last reported to live in Colmesneil — Clarence Gordon Davis, 57, and Lloyd Tillman Delano, 50 — are not in compliance. "Davis and Delano were both convicted of sex related offenses and ordered to register as sex offenders for life after their release from confinement" Reynolds said.

Davis and Delano both moved from their registered addresses without notifying local authorities. "According to witnesses, Davis and Delano both moved out of their registered addresses months ago. Registered sex offenders must report a change in address no later than the seventh day before the intended change of address," he said.Reynolds also discovered that Davis and Delano both failed to maintain a current Texas driver's license or identification card. Registered sex offenders must have a valid TX Driver's License or TX ID Card no later than the 30th day after release from confinement and renew their driver's license or ID card yearly."Sex offender registration and notification programs are important for public safety purposes. Sex offender registration is a system for monitoring and tracking sex offenders following their release into the community," Reynolds said. Registration provides important information about convicted sex offenders to local authorities and the public, such as offender's name, current location and past offenses. "When offenders fail to comply with the registration requirements, law enforcement and the public lose their ability to track these potentially dangerous individuals," Reynolds said.Following the investigation, Reynolds presented the cases to Pct. 2 Justice of the Peace Milton Powers, who issued warrants for their arrest on charges of failure to comply with registration requirements with previous convictions, a second-degree felony. Delano also had an active arrest warrant for burglary of a habitation. On Oct. 12, Reynolds and Constable Dale Freeman located and arrested Delano. As of press time, Davis had not yet been located.