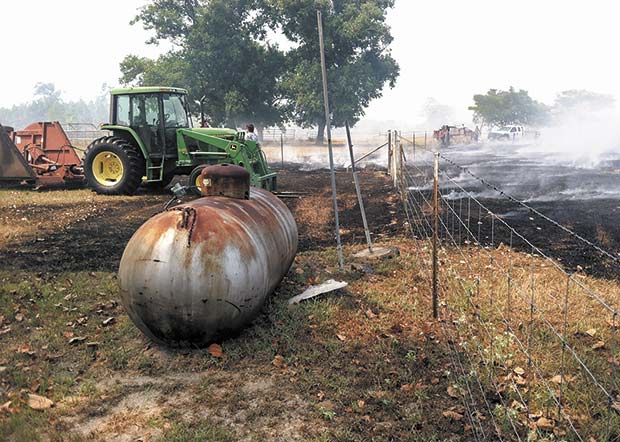 On Friday, September 13 at approximately 11:15 a.m., a grass fire was reported in the Harmony community. The fire originated behind a home on the south end of County Road 1125 Loop and quickly spread across hay fields and began threatening homes on F.M. 256 South. The Woodville VFD responded, but soon asked for mutual aid from Shady Grove VFD. The Texas Forest Service also responded to the scene and summoned state resources to assist.

Texas Forest Service Operator John Setlocker was on scene and directed traffic into the scene. He advised me that before he could direct resources to the scene, the fire was seriously threatening a home on F.M. 256. He engaged the fire with the fire extinguisher from his vehicle to prevent the flames from getting to the structure, just as the fire trucks arrived. The Woodville VFD resources were able to control the flames at the locations where they were staged, but as soon as they moved forward to engage another front, the flames flared up and the fire was again burning behind them from where they just had been.

The fire was in a hay field with some brush and small brown vegetation in the draws all of which was on fire. The fire had more fronts moving in different directions than we had resources to engage it.

County Judge Jacques Blanchette and I, Dale Freeman, Emergency Management Coordinator, were staged at a position in front of the fire directing resources to our location as soon as they were available. Firefighters arrived, with Shady Grove running a truck up and putting water on the flames just feet from the house, as indicated by the photo. A tractor and a propane tank sat at the other side of the structure, and Woodville firefighters arrived as the flames were going under the tractor and arriving at the propane tank. These flames were quickly knocked down before they could burn the tractor, the house, or the propane tank. In less than a minute, I believe all of these would have been lost had the VFDs not arrived as they did.

With our drought and fire danger as they are, Texas Forest Service has moved additional resources into our area to fight fires. John Setlocker summoned a dozer to plow a line around the flames and he also brought in a TFS "Brush Truck" and crew. There were several six-wheel ATVs and crews with a water tank on them for fighting fires in rough terrain. TFS also brought in mutual aid from the Big Thicket National Park in the form of a brush truck and crew. All working together the fire was brought under control without a structure or equipment loss. There was all total approximately twelve to fifteen acres burned.

Everyone needs to stop, think, and remember just how dry and dangerous it is to start an outdoor fire. It is only after considerable consideration that the Burn Ban is put in place. Please don't do it. Despite the criminal penalties for a burn ban violation or allowing a fire to spread onto someone else's property, can you imagine if someone lost their home because of a fire that was intentionally or recklessly set, and you were responsible?