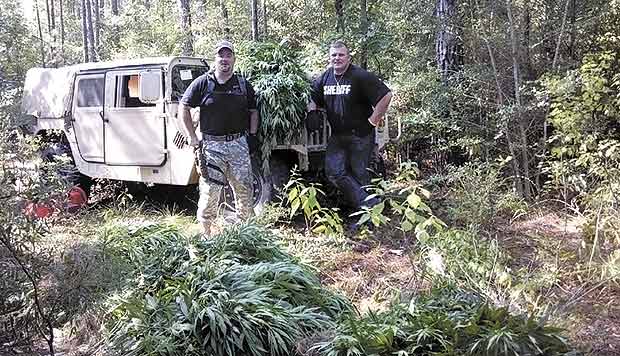 Tyler County Deputies discovered over 2,000 marijuana plants growing in a pine sapling grove in a deer lease near Harmony on Saturday, September 7 after hunters in the area discovered the plants.

According to Phil Ryan of the Tyler County Sheriff's Department, dispatch received a call about 3 p.m. from hunters stating they had found some plants that looked like marijuana. Deputy Laurent responded and was shown the field, and the plants were identified as marijuana.

The plants were planted throughout small pine trees and had an irrigation system running through them. There was also a sophisticated camp that the operators were staying at, but they were gone when deputies arrived.

"We sat up on the field for several hours and, when no one returned, we went back in and pulled up the entire crop, which consisted of 2,096 plants," Ryan said.

Deputies have evidence in the case but no arrests have been made. If you have any information about the marijuana plants, call the Tyler County Sheriff's Office at (409) 283-2172.