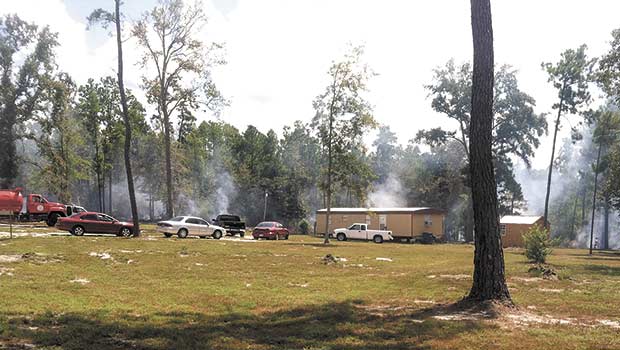 Tyler County is currently in extreme drought conditions. We are listed at the top of the scale on the KBDI Scale as "Extreme Drought." The Texas Forest Service Fire Danger Maps still list Tyler County as having Moderate Fire Danger and Moderate Fire Forecast. That is only because of the high humidity that we have. During the middle of the day, the intense heat and sun offsets that, and we have dangerous fire conditions.

Sunday, we had a fire in Chester in the Deer Country Addition. The fire started from a barbecue pit in the back yard. The homeowner momentarily went inside and, on return, the fire was running across his back yard. Chester VFD was the lead fire fighting unit with assistance from Shady Grove VFD and Corrigan VFD. In spite of the best efforts of the firefighters, at one point the fire was fanned by high winds and jumped the road with firemen fighting it. They were able to extinguish the flames shortly after it crossed the road.

The flames burned up to and under the home where it started, but was fought by the homeowner until firefighters arrived. Across a narrow wooded area were several more residences that were threatened also, but favorable winds directed or slowed the fire from them until firefighters could put it out.

As this was occurring on one end of the county, Fred VFD with the Assistance of Silsbee VFD was fighting a fire that consumed an RV. Later in the day I heard Woodville VFD going to a fire on Hwy. 256 between Hwy. 190 and Hwy. 287. At about the same time, Spurger VFD and Ivanhoe VFD were fighting a fire on F.M. 1013 between Spurger and Hillister.

Please, everyone be careful with fires until we get some much-needed rain!