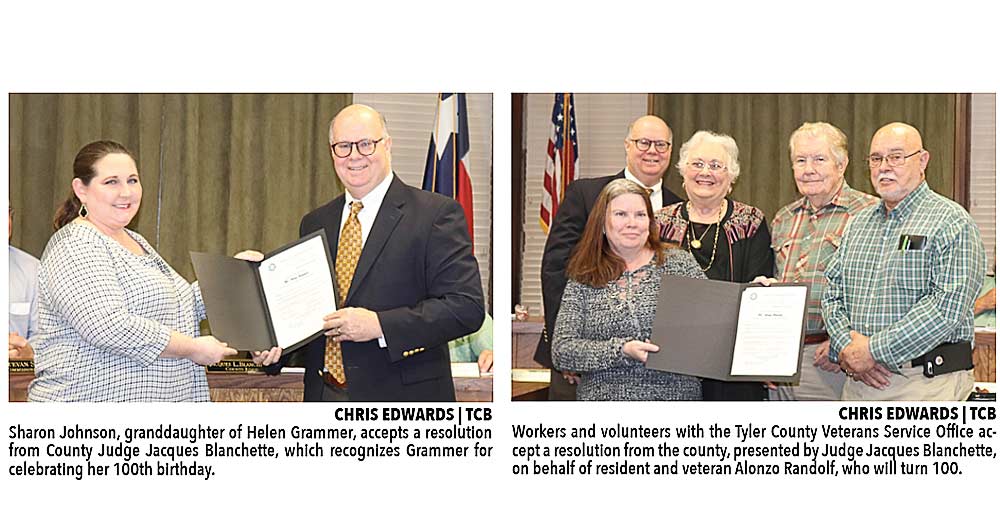 This email address is being protected from spambots. You need JavaScript enabled to view it.

WOODVILLE – At its Monday morning meeting, the Tyler County Commissioners Court took an opportunity to honor a couple of centenarians with resolutions.

Helen Grammer and Alonzo Randolf, both of whom are set to celebrate the century mark with their coming birthdays, were honored by County Judge Jacques Blanchette and the Commissioners Court for their longevity. Although neither resident was present, both were represented by individuals who accepted the resolutions on their behalf. Grammer’s granddaughter Sharon Johnson accepted hers while volunteers and workers with the county Veterans Service Office accepted Randolf’s.

Randolf, as Blanchette noted, is a decorated military veteran, who served in an African American regiment, which was a sort of successor to the famed Buffalo Soliders of the Civil War.

On the regular agenda of items to consider or approve, the commissioners approved the appointment of a delivery supervisor of the election equipment for the coming election, as early voting begins next Tuesday.

By statute, the sheriff’s office is in charge of the delivery and setup of voting materials to the polling locations, but since incumbent Bryan Weatherford has an opponent in the coming race, Blanchette said that the appointment was an idea put before a vote “for the sake of oversight.”

“We don’t have any concerns about tampering,” Blanchette said. “We just want an extra set of eyes.”

Pct. 1 Commissioner Martin Nash volunteered to work with Blanchette to find someone to serve as elections equipment delivery supervisor.

Other Business
• During Monday’s meeting, the commissioners voted to initiate the procurement for administration of the county’s Hurricane Harvey program of buyout/recovery funds from a CDBG grant.
The commissioners also voted to appoint a committee to rate the proposals for the program. The committee will consist of Jackie Skinner, Ken Jobe and Blanchette.
• Commissioners approved an increase in the fee for pipeline crossings in Tyler County from $1,000 to $1,500 per crossing.
• An agreement between the county and Workforce Solutions Deep East Texas was approved for training individuals at no cost to the county. Blanchette noted that the county has participated in the program in the past.