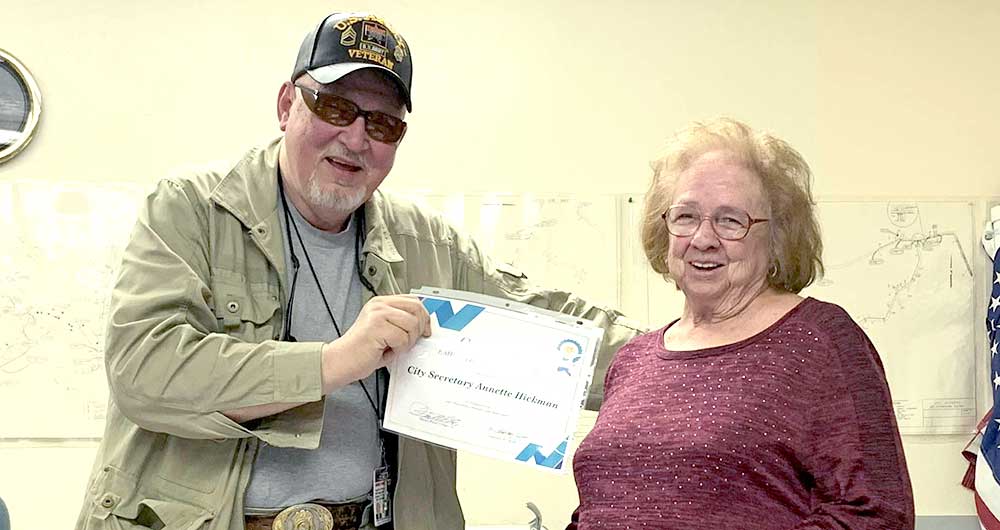 Petri said, “I have found her knowledge indispensable,” and he joked that her appointment was a life-time affair, for she was here when General Custer passed through.

Not only does it appear she is the longest serving city secretary in Tyler County history, her assistant Charlot Thomas said, “Probably is the longest in Texas.”

Petri introduced a proposed “Second Amendment Education Ordinance.” He has been passionate about protecting citizens’ rights since coming into office, being the first to pass an anti-red flag ordinance in Texas as one online paper reported. This ordinance reflected a clarified definition of “shall not be infringed” and that the amendment to the Constitution was not simply about hunting or self-defense rights but also a “necessity to the security of a free State.” The ordinance finds any lawmaker in violation who passes any gun control for the illegal seizure of any gun “not used in a crime.” The ordinance asks for the violating lawmakers to be impeached or to get a recall election for their “violation of their Oath of Office.”

There was a brief discussion, and the ordinance was tabled to the next meeting.

Petri recognized Michelle Cowan who completed two National Incident Management System classes, and he directed that copies of her certificates be placed in her personnel file. He has been encouraging all since coming into office, and he has 12 in his file. The NIMS training helps all city officials work with others in crises and speak the same language.

There was a little discussion on the computer upgrades and the need within two years to upgrade their gas monitoring equipment and software.

There was no emergency as Director of City Works Dale Clamon had the foresight to obtain extra parts.

The council passed the minutes to the previous meeting as well as the city and gas company financials without much comment.