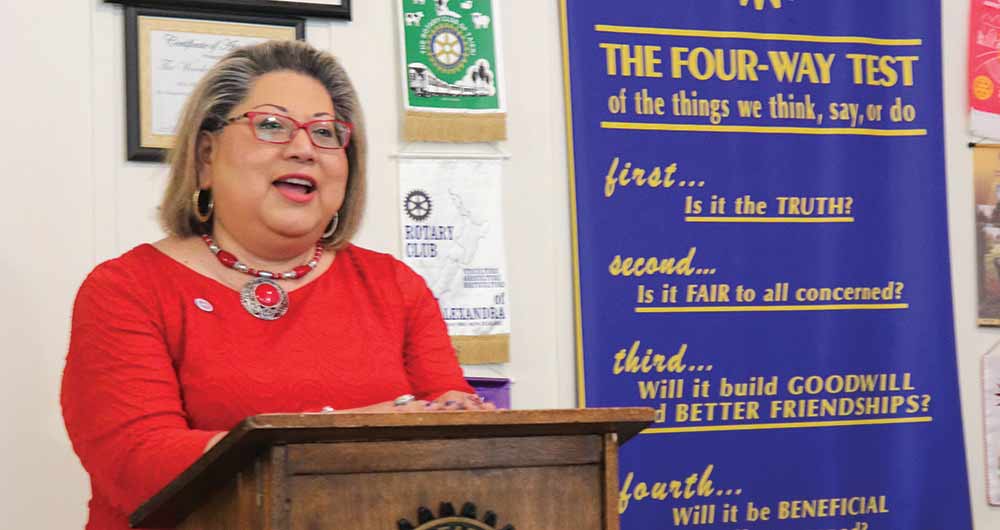 Cheryl Downing, general manager for administration of the Alabama-Coushatta Tribe, spoke before the Woodville Rotary Club. Downing gave an update on the status of H.R. 759. (CHRIS EDWARDS | PCPC PHOTO)

WOODVILLE – Cheryl Downing, general manager for administration of the Alabama-Coushatta Tribe, gave an update on Naskila Gaming and the status of legislation concerning the operation of the venue, at the Woodville Rotary Club meeting on Wednesday.

If passed, H.R. 759, which was authored by Rep. Brian Babin (R-Woodville) will allow the tribe to continue operating Naskila, which features Class II gaming. The bill, which has drawn bi-partisan support, was approved by the House Committee on Natural Resources in July.

Jimmie Cooley, a former Woodville mayor, introduced Downing to the Rotary group, who met at the Pickett House restaurant.

Cooley, who has been working in support of the tribe’s efforts with Naskila, referred to the tribe as “our wonderful, wonderful neighbors,” and gave a brief update on the bill, which is on its way to the Senate.

Tribal Council Chairwoman Cecilia Flores and other members of the tribal council were in Washington, D.C., meeting with the staffs of Senators Ted Cruz and John Cornyn, neither of whom have yet voiced support for the bill, according to Cooley.

While in the nation’s capital, Flores and the tribal council members are working at getting a hearing scheduled for the bill. “There is support, but they need to move forward,” Downing said.

“We need support of our Texas reps in the Senate, as well as the other votes,” she said.

Naskila employs 410 people, 30 percent of whom are tribal members, Downing said. She added that the number continues to rise, and the majority of employees are from the local region. Cooley added that more than 3,000 people go to Naskila on a daily basis. Naskila is responsible for more than $139 million of the local economy, annually, Downing said.

Tyler County Precinct 1 Commissioner Martin Nash, who was in attendance, said “I don’t think there’s anything we could do, economically, than to give these folks a right to do this.” Nash urged everyone in attendance to also contact Gov. Greg Abbott.

Christi Sullivan, who works as the tribe’s director of media and communications, agreed with Nash. “This is a fairness and equality issue,” she said.

Sullivan spoke about the Kickapoo Tribe, which has operated a gaming facility near Eagle Pass for 20 years. If the bill is passed, it will also allow the same protections for the Yselta de Sur Pueblo (also known as the Tigua) Tribe in El Paso.

Sullivan also said the issue of equality is another talking point, in addition to the number of jobs and economic impact, to answer a question posed by Lisa Meysembourg, Woodville ISD Superintendent. Meysembourg, who is new to the area, asked what would serve as a good talking point to gather support for the issue.

Downing said, ultimately, representatives need to hear from voters in the area about the importance of Naskila. “We desperately need your voice and support,” she said. “It’s going to take [lawmakers] hearing from the constituents, especially here in East Texas.”

Aside from the jobs added to the regional workforce, Downing said the tribe has been able to expand its healthcare offerings with Naskila’s proceeds. They now have a full-time doctor who practices five days a week and have expanded the tribe’s health clinic. The tribe has also been able to build and open a veterans service building.

Downing said that anyone wishing to contact Cruz and Cornyn can send them an email from the website https://supportactribe.com .