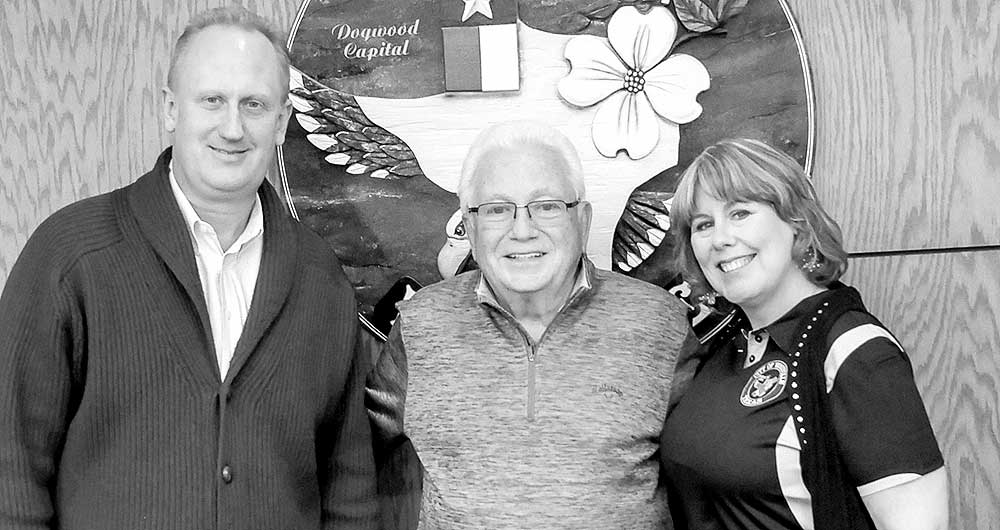 WOODVILLE – Herb Branch, a longtime leader in the community, was sworn-in at the Tuesday, Nov. 13 meeting of the Woodville City Council.
Branch was appointed to fill the position of Alderman Place 5 after Byron Stowe stepped down in September.

The councilmembers also recognized outgoing councilmembers Amy Bythewood and Lee Mann as well as Mayor Russ Nalley for their years of service to the city.

During the meeting, which was held on Tuesday night instead of the usual Monday, due to the recognition of Veterans Day, Nalley and the councilmembers heard reports on a few projects including awarding a bid for a new woodchipper and news on a grant application.

City Administrator Mandy Risinger gave an update on a grant the city applied for through the General Land Office. The grant, which is for the amount of $2 million with a $100K match for the city, was allocated due to the flooding in 2016. If Woodville is awarded the grant, it will be a significant one for the city, Risinger noted.

She said that the city is looking at projects pertaining to streets and drainage on Cobb Mill Road and Cardinal Drive, if the money is awarded.
Risinger said the state has requested additional information and documentation. “That lends us to believe we’re pretty hopeful we can be funded…that’s a big grant for us,” she said.

Risinger said the city did not meet criteria for funding with another grant it had applied for. The funding, which was through the Texas Department of Emergency Management for hazard mitigation, would have been put toward a generator for the 190 West water pump station. She said changes in the program disqualified the city for the grant.

However, with funds that have been allocated through DETCOG for Hurricane Harvey-related relief and repair projects, Risinger said it is possible for the city to apply for some of the money that Tyler County will receive, which is around $757K, in order to fund generator projects for the city.

Other Business
Council approved a resolution to note the canvassing of returns of the citywide election, held on Nov. 6, and to declare the final results.

City Secretary Terri Bible said there were 13 provisional ballots counted after the general election results were tallied. The ballots, Bible said, would not change the results of the election, which saw Paula Jones win her bid for Mayor and Tony Greer win a place on the council.

Another topic discussed by council and Nalley was the nomination and appointment of a representative for the city on the Tyler County Appraisal Review Board. Bythewood said the spot is currently empty and is needed. The position was discussed, but no one was named as a possible appointee.

Council also voted to award a bid for a new woodchipper, a Brush Bandit, from Stanley Parts and Equipment, in Channelview. The new chipper will replace a 1999 model of the same brand and will cost $39,986.98. Risinger said the cost is “sufficiently covered in the budget.”

Nalley added a word of praise to the city workers who pick up fallen tree limbs around the city.

Councilmembers also approved an online sale of the city’s retired assets. Nalley said the city has seen better results with online auctions than on-site auctions that were held in the past.

The city will auction off several vehicles and pieces of equipment, including two pickup trucks, a garbage truck, a street sweeper and a road grader.