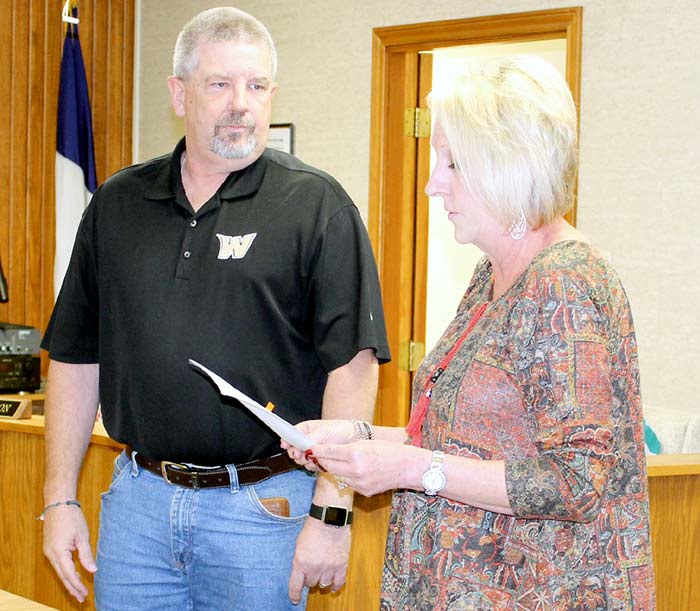 Tammy Watts, right, administers the oath of office to Jimmy Tucker, left, at Monday’s meeting of the Woodville ISD Board of Trustees. Fellow trustees elected Tucker to continue as board president. Valerie Reddell photo.

Woodville ISD trustees Jimmy Tucker and Bret Smith each took the oath of office Monday after their election to a new term on the board. The board then re-elected Tucker as president, Bret Smith as vice-president and John Wilson as secretary.

"We will strive to do our best to serve you as officers," Tucker said.

Trustees also unanimously approved an application for a waiver from the Texas Education Agency for missed instructional days in the aftermath of Hurricane Harvey.

Principals from each of the WISD campuses presented a summer of their campus improvement plans which were updated to help ensure the district meets accountability criteria set by the Texas Education Agency.

The challenge lies in the fact that the agency is still drafting the policy on accountability criteria. In effect, students, teachers and administrators are trying to hit a target for the current school year that hasn't been set yet.

In the meantime, campus leaders say they are working to improve reading levels among students who have struggled in prior years.

For example, all middle school students are participating in a "Drop Everything and Read" program in the mornings, according to principal Eric Holton. Students at that campus who have been identified as needing to improve skills are also participating in afterschool tutorials for the next six weeks to improve their mastery of skills and concepts that will appear on the mandated test.

High School Principal Morgan Wright told the board that his campus would not make any major changes since they mastered 14 out of 15 criteria, but they would not become complacent.
"We know we've had some success, but we won't want to rest on that," Wright said.

Staff members have put together a plan on how to look at some students in special populations that could have an impact on the district's rating as a whole.

Wright said they are using the zero hour to help students master areas that they are struggling with.
The other goal at the high school has been to focus on courses in multiple career pathways that students can pursue.

WHS started a criminal justice program last year. A second class has been added and they hope to launch a forensic science class next year.

Fourteen students are enrolled in a teacher prep program, and they are given the opportunity to get some hands-on experience with younger students.

Wright said they run surveys from time to time to judge what interests current and incoming students have.

"The building program has taken off," Wright said. "Students are building deer stands, chairs and other things. They are getting hands-on lessons on how to use a saw, how to measure and other important skills."

"The game we play is driven by data," Superintendent Glen Conner said. "We collect data about where kids are academically and where their interests are from a career standpoint when they get to high school."

Conner also commended the efforts to work closely to integrate lessons on all campuses, so that students have a smooth transition from one school to another as they move toward graduation.
"We use the data to make changes in classrooms from a day to day basis, not a six-week basis," Conner said.

"Looking at all those plans, I heard from each of y'all the goals that we set (as a board)," trustee Trey Allison said. "I realize communication is flowing from the superintendent to you. Math and reading are No. 1."

Allison also praised the campus leaders for breaking down the goals and implementing steps to reach those goals.

"Many people set goals and don't really look at them till the next year rolls around," Allison added.
During the superintendent's report, Conner informed the board that trees on the intermediate campus had received a "haircut" during the Thanksgiving break.

"It's more aesthetic, and it might get the grass growing on some areas of bare sod and eliminates the hazard posed by dead limbs," Conner said.

Work on drainage issues and gutters at the high school building was completed as well.

"We are still waiting on doors. I thought some would be installed over the holidays, but that didn't happen," he added.

Conner also would like to schedule a security workshop to harden the buildings in light of things that have happened recently at school facilities and other public buildings.

During a discussion on attendance and enrollment, Wilson asked why enrollment varies widely from grade to grade.

Conner answered that there are some classes that start with fewer students in early grades, then remain smaller as the students advance through the grades.

As an example, Conner pointed out that the current ninth grade class has been smaller throughout their school career.