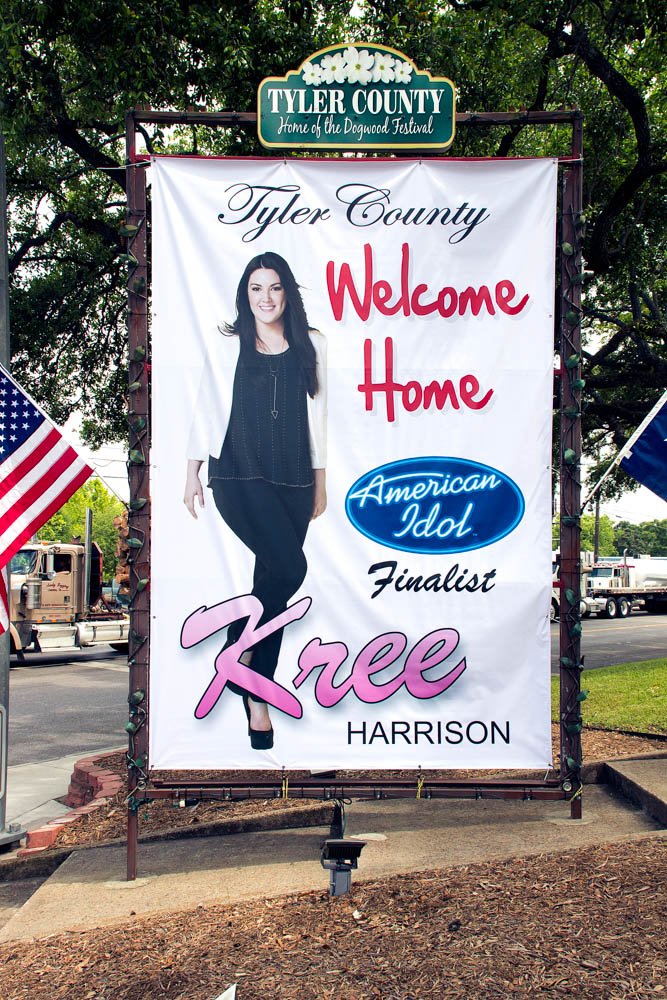 Kree Anette Harrison was born May 17, 1990 at St. Mary's Hospital in Port Arthur. Her parents, Clint and Kathy Harrison were married on Valentine's Day, 1993 at Agape Church in Colmesneil by their pastor, Sister Virginia "Gina" Harrison. The family, including older sister and brother Lacy and Michael, moved to Foster Hill Road in Dam B. The home, which the family still owns today, was given to them by their grandmother, Beverly Mire, of Groves. Later, a younger brother, Cory was born. The family also enjoyed having their other grandmother, Myra Harrison of Colmesneil, close by.

One Sunday, while at church, three-year old Kree walked up to Sister Gina and asked, "Can I sing a song?" As always, she was willing to let all children come forward when they requested. "I was expecting 'Jesus Loves Me', but she belted out 'El Shaddai' by Amy Grant," said Sister Gina. "I knew then this child had a special gift."

Over the next several years, Kree sang for churches, rodeos, weddings and competitions. Tyler County Judge Jacque Blanchette (then funeral director and local volunteer Emcee for events) remembers introducing Kree on several occasions as "Woodville's future Nashville hopeful!" At age eight, she was the opening act for American R&B performer Percy Sledge. At age nine, she won Artist of the Year from Kirbyville Playhouse. At age 10, she sang on 'The Rosie O'donnell Show' and was invited back on three other occasions. Kree's family made sure she had publicity photos and helped her to actively pursue her singing career. Other experience came from singing in country playhouses all over the area, as a special guest at a Warren Talent Show, and she was second place winner in the New York Apollo competition held in Houston. As a young child, Kree went up to the service desk at WalMart in Jasper and said 'I can sing'. They were polite to the little girl, but she persisted, "I mean I can really sing. Will you let me sing over the loud speaker?" And they did!

{pullquote}Kree, you must be so happy you have reached your goal, making it into the top three." To this Kree replied, "Oh Memaw, I have changed my goal...I want to win this thing{/pullquote}In the fourth grade at Woodville Intermediate, principal Joanie Atkinson wanted every student to be a published author. So, she established the Woodville Intermediate Dream Writers Magazine and all students had the opportunity to write their own poem for publication. Fourth grade team teachers Virginia Haynes and Carolyn McKinney taught Kree that year and the poem she wrote was an acrostic using the word SUCCESS. (See actual poem and picture on page 2B in this issue). "I can see that Kree has not changed a bit since then," said McKinney.

Kree's mother was a stay at home mom and her father worked off shore. When Kree was 11, tragedy struck the family. Her father Clint was flying to Africa for a job, when the plane crashed off the coast of Spain on October 11, 2001. Sister Gina and Agape Church was there for the family. No words can describe the loss.

After the sixth grade, Kree and her family moved to Nashville to pursue her singing career. She attended seventh grade there, and then was home schooled in order to devote more time to her music. These years were filled with schoolwork and singing gigs.

{gallery}kreestory:350:160:1:2{/gallery}Tragedy struck the family a second time on September 22, 2009, when Kree's mother was involved in a head on collision. The second vehicle contained two passengers and all three women died that day. Again, Sister Gina was there for the family in their time of need. Kree's mother is buried in the Colmesneil Cemetery on FM 256 East.

Before Idol fame, Kree was living with her sister and brother-in-law, Laci and Trey Bruce, and nieces Railee and Sela. She has been making a living singing Demo's, doing shows at '3rd and Lindsleys' in Nashville among other places. She has also done some waitressing. Her sister Laci is credited for pushing her to try out for Idol.

Want to know a little about her favorites? Kree loves: sweet potato casserole, boudain, chocolate mint ice cream and is a self-proclaimed chocoholic. Her idol is Audrey Hepburn (loves her simple classic look) and she loves shopping for clothes at second hand vintage shops. Kree is an outdoor girl who loves fishing, hunting, four wheelers and rodeos. She loves people (everybody!) and loves giving hugs. Those who meet her instantly recognize her sweet spirit. Kree also says, "I love Sister Gina, I love making pumpkin pie with my grandmother on holidays, I love old movies like 'Funny Girl' and eating popcorn and chocolate (while watching movies!)".

During her American Idol top three, hometown visit Saturday, May 4, Kree made several stops visiting family and various locations meaningful to her from childhood. "I will always call Woodville home," said Kree.

The press conference was held at the Wesley Center at Woodville United Methodist Church. During the question and answer session, Kree was given a handmade necklace from one of the local children. Woodville Mayor Ben Bythewood and the City Council proclaimed it 'Kree Harrison Day' and Judge Blanchette and the county commissioners presented her with a resolution of support. Other supportive resolutions where given to her from the office of State Representative James White of Hillister and from the office of Texas Governor Rick Perry. A complete audio and slideshow of the event can be viewed on a utube video available at www.tylercountybooster.com.

People from all over East Texas lined the downtown streets of Woodville for a welcome home parade under beautiful blue skies. As planned by Woodville City officials, the parade was about Kree and the youth of Tyler County. No businesses or dignitaries where represented. Instead, it was full of groups of young people who were sharing their talents, representing their accomplishments and volunteerism.

Kree was enthusiastic with fans during the small rodeo put together by Terry Riley and his crew of volunteers at the Tyler County Rodeo arena. She sang, signed autographs and of course, gave lots of hugs.

During her visit to Agape Church, Kree was able to sit with Sister Gina on the same stage where she sang her first song publicly. During their visit, Kree sang her Dad's favorite Hymn, 'In The Garden', while friend and guitarist, Misa Arriaga accompanied her. A small group gathered together to pray for Kree. They prayed that God's plan would be accomplished in her life, that He would protect her and lead her in the path she should go. They also thanked God for her talent.

Finally, the American Idol limousine made its way to Beaumont for the final leg of her home visit – a sold out concert at Ford Park. Thousands of fans enjoyed George Jones favorites sung by Britt Godwin. They also enjoyed local band The Pegwinders and Earlette Stowe of Woodville.

Kree is back in California, getting ready to sing for a spot in the American Idol finale. Thanks to the hard work of Woodville city officials, local law enforcement, numerous volunteers and lots of fans, Woodville and Tyler County will be well represented this week on national television. A special thanks to everyone who helped make this event happen for Tyler County and East Texas (you all know who you are). No matter what happens, Kree Harrison from Season 12 will always be our American Idol. Good luck Kree. We are all voting for you!