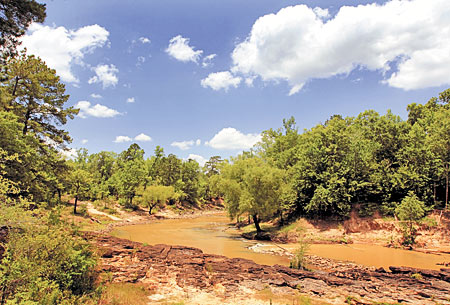 If you've lived in Tyler County for long, you have heard about a place called Fort Terán. Some know it as a long dirt road that is perfect for long, lazy horseback rides or a place for high school students to drive around in their trucks. Some people even swim or canoe around the old fort site. Despite the fact that the historical marker is a well-known location in the community, most people aren't aware of Fort Terán's rich and interesting history.

Jonathan Gerland, writer for "The Pine Bough" Magazine and executive director at the history center in Diboll is one of the experts on the history of Fort Terán. According to his article in the December 2011 issue of "The Pine Bough," Fort Terán began as a border patrol on the Neches River. Mexican citizens controlled the post, and used it to keep illegal immigrants from the United States from crossing over into Mexico.

The Fort is named after General Manuel Mier Y Terán, who was sent on an expedition by the President of Mexico to explore and defend Texas. According to Gerland, he fought with Mexico's revolutionary forces beginning in 1811 and was elected to the first congress in 1822. Later, Terán was named commandment general of the Eastern Interior provinces, which gave him both military and civil authority over several provinces, including Texas. At this time, Mexican owned Texas was on the brink of falling into the hands of the United States, and Terán increased military presence in the state by establishing six new garrisons including Tenoxtitlán on the Brazos River, Anahuac at the mouth of the Trinity River, Lipantitlán on the Nueces River, Terán on the Neches River, Velasco at the mouth of the Brazos River and Lavaca on the Lavaca River.

Although Terán created these outposts in hopes that Mexican influence would overpower American influence in Texas, he didn't actually oversee the building of Fort Terán.

Peter Ellis Bean built and commanded Fort Terán, and according to Gerland was "sort of a Forrest Gump character of the early nineteenth century Mexico and Texas, who for most of his life brushed shoulders with nearly all the major public figures in both regions."

After traveling with Terán on his expedition of Texas, Bean was commanded to establish Fort Terán on the bank of the Neches River in 1831. According to Gerland, Fort Terán was most likely built shortly after 1831 and was constructed with wood, which explains why none of the original structure stands today. But, according to letters written by Colonel Piedras in 1832, a bricklayer or stonemason was also used in construction of Fort Terán.

Interestingly, Bean housed an American visitor at the fort for several weeks in spring of 1832. The land surveyor, George W. Smyth, stayed with Bean at Fort Terán and would later go on to sign the Declaration of Independence.

But, the Mexican occupation of Fort Terán ended shortly after it began. The Fort was abandoned in August of 1832 after Colonel Piedras was sent back to Mexico and Bean was given his old job as commandment of Nacogdoches. According to Gerland, Fort Terán had been completely destroyed by 1834 and by 1835 Terán was just a small town consisting of about 10 houses.

Afterwards, a ferry system was established at Fort Terán and several attempts were made to create a township surrounding the area. Sadly, a large town never prospered near Fort Terán, but a post office did operate from 1871 to 1885 until the service moved to nearby Rockland. A railroad was built shortly after and ended the ferry service at Fort Terán. The railroad also diminished the riverboat traffic on that area of the river, and slowly but surely, Fort Terán was forgotten.

According to Gerlands' studies, by the 19th century Fort Terán had become hard to find and most of the buildings had been abandoned and rotted away. At that time, many folk tales surfaced telling of lost Mexican treasures and cannons sunk at the bottom of the Neches.

Sadly, the likelihood of any actual gold being found at Fort Terán is slim.

"The legends are unconcerned that history shows very little gold ever existed in Mexico Texas," says Gerland. "The native Mexicans in East Texas were much poorer than their Anglo fellow citizens, and the Mexican soldier, even colonel Bean, were notoriously poorly paid."

Now, Fort Terán is just a small historical marker, situated deep in the piney woods of Tyler County. Although treasure has never been found at the location to this day, maybe Fort Terán's treasure is actually held in it's rich, cultural history that ties characters of years ago to the citizens living in Tyler County today. If anyone has ever gone and walked the banks of the Neches River near the old Fort, or taken a dip in the cold, muddy water, they probably understand that the treasure of Fort Terán isn't meant to be found, it's meant to be understood.

If you would like a copy of the entire Fort Terán article that includes a deeper history and more historical photos, contact Jonathan Gerland, Director at the History Center in Diboll by calling (936) 829-3543 or by visiting www.TheHistoryCenterOnline.com/.