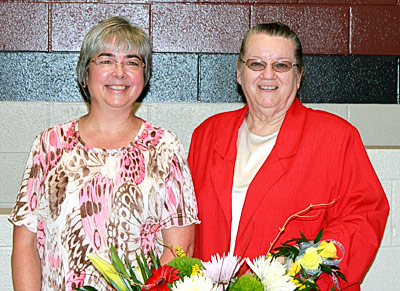 Mrs. Vickie Nugent began teaching at Spurger 25 years ago and has been an instructor at the school for her entire teaching career. She has taught many different subjects over the years, including earth science, IPC, biology, chemistry, physics, AP biology 8th grade science, ACT/SAT preparation, and elementary French. Mrs. Nugent was also a part of many activities that touched the lives of students throughout the campus. She was involved in operation graduation, student council, Texaco Challenge, and UIL. She has also been a huge part of National Honor Society since its charter organization at Spurger in 1987.

"My favorite part of teaching was trying to get students to think for themselves and seeing their pleasure when they succeeded in mastering something new and challenging" says Nugent. "I also get to keep learning about a field in which new discoveries are constantly molding the world around us. It has been an exciting time with no two days the same!"

After retirement, Mrs. Nugent plans on traveling to Hawaii and doing some mission work in Corpus Christi, Wyoming and North Carolina. She has also joined a disaster relief team in hopes to help others that have experienced catastrophic events. On top of that, she has started her own business, "Vickie's Cakes a Creations" and will expand that, as well as spend time with her three grandchildren.

"In my spare time I love to scrapbook, take photos, sew, and read," says Nugent "I hope I never stop learning."

The second teacher that will be retiring from Spurger ISD is Mercedes Hall. Mrs. Hall has been at Spurger for 21 years and enjoyed teaching English two, three and four, journalism, drama, world history, and ESL. She was also involved in national honor society, operation graduation and served as the Librarian for the district. She received an award for being a Tyler County Teacher of the year, and claims that it was one of her favorite moments. She says she will miss the interaction with all of the students, but plans on traveling in her motor home after retirement.