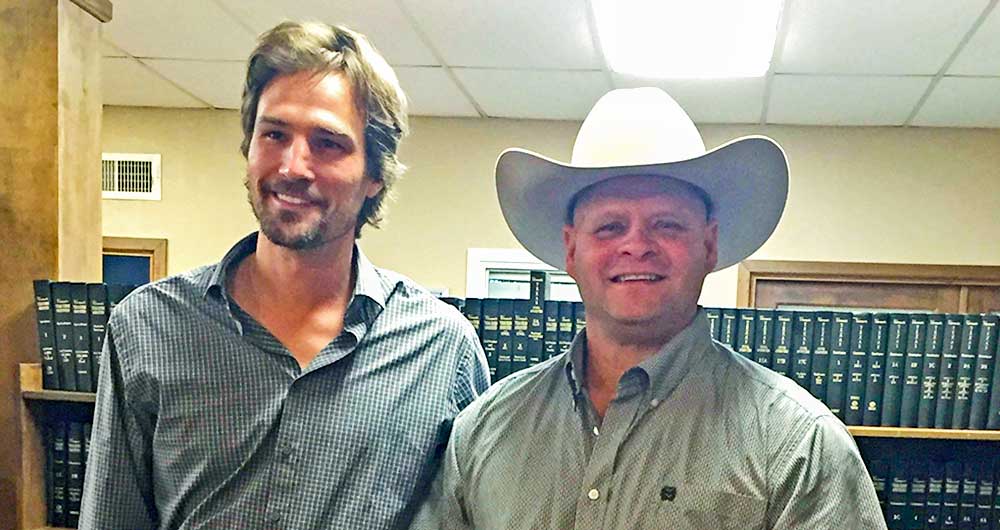 WOODVILLE – Members of the Tyler County Chamber of Commerce paid a surprise visit to District Attorney Lucas Babin’s office on Monday evening to deliver some news.

Babin was named the Chamber’s Citizen of the Year, an honor he said he was surprised, yet thankful, to receive. “My objective as DA is simple to do the job I was elected to do; see justice is done in Tyler County. I can’t do it alone. It’s a team effort,” he said.

Another top law enforcement officer in Tyler County, Sheriff Bryan Weatherford, was also feted by the Chamber with the Hometown Hero award. Along with Chamber members, family members of both men were on hand to help them celebrate.

Babin and Weatherford both spoke of how their roles were part of a team effort toward effective law enforcement in the county. “If one part of that system is broken, it doesn’t work,” Weatherford said.

“You’ve got to have investigations, arrests, cases built. You’ve got to prosecute. It’s all working hand-in-glove,” said Babin’s father, Rep. Brian Babin, who was present to congratulate his son, along with Babin’s wife Luciana.

Along with the Citizen of the Year and Hometown Hero honors, Chamber president Leann Monk announced the other award recipients for 2020. The Chamber recognized the following individuals and businesses:

The recipients will receive their awards at the annual Chamber banquet, which will take place at 6 p.m. on Saturday, Feb. 29 at Triple D Ranch in Warren.