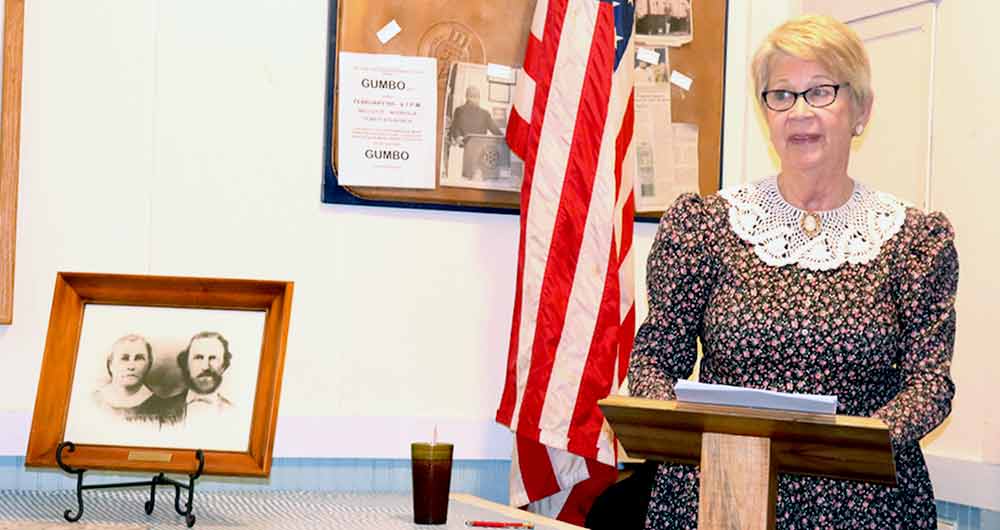 WOODVILLE – The Tyler County Heritage Society held its annual meeting on Monday evening at the Pickett House. Along with a dinner and business of the group, members heard a presentation on a topic in local history.

Jan McCartney, a Chester resident, was the speaker for the year’s TCHS meeting. McCartney spoke about the history of Mount Hope, Peach Tree Village and Chester. “My story begins with Indians being the first to settle in this area,” McCartney began her presentation.

The presentation indeed began with information about the Alabama and Coushatta tribes in the early 19th century, who settled in Peach Tree Village, which they called “Ta-Ku-La,” which means “Peach Tree.” McCartney provided a detailed timeline and spoke of how Anglo settlers came to inhabit the region.

McCartney’s presentation provided an overview not only of the settlements that came to be in the northwest part of Tyler County, but also of historic settlers to the area, such as James Barnes, Peter Cauble and Valentine Ignatius Burch. She also gave context to the time with information about the battle for Texas independence, Texas’s eventual statehood and the subsequent Mexican-American War.

Some of the first settlers were Barnes; Seamans; Wilson; Cauble; Wheat and Barclay families, McCartney said. McCartney, herself, is a descendant of James Barnes.

The presentation depicted life in the then-prosperous communities, which each boasted blacksmith shops, saloons, hotels, churches and stores. McCartney’s narrative also explained the decline of Mount Hope and Peach Tree Village, which was exacerbated by the railroad that bypassed them, and led to prosperity for Chester.

McCartney said the reason for settlers buying land and building the communities had to do with what the land itself had to offer for agricultural pursuits. “This is a rare area with many different types of soils, good climate and water,” she said. “It has been referred to as ‘The Garden Spot of Texas’; the land of milk, honey and pork.”

McCartney’s presentation ended with an overview of present-day Chester.

The presentation represented what TCHS’s members strive to achieve in preserving the heritage of the area. TCHS President Sarah Reinemeyer, in her remarks prior to McCartney’s program, encouraged members who were present to spread the word into the community for anyone interested in history to join.

TCHS, a non-profit organization, owns and operates Heritage Village, and provides memberships to individuals, families and small businesses, which range in annual dues from $20 (for individuals) to $60 (for small businesses.) Anyone interested in being a part of TCHS can obtain a membership form from the website Heritage-village.org or by stopping by the Heritage Village Museum Store located on the Village grounds in Woodville.