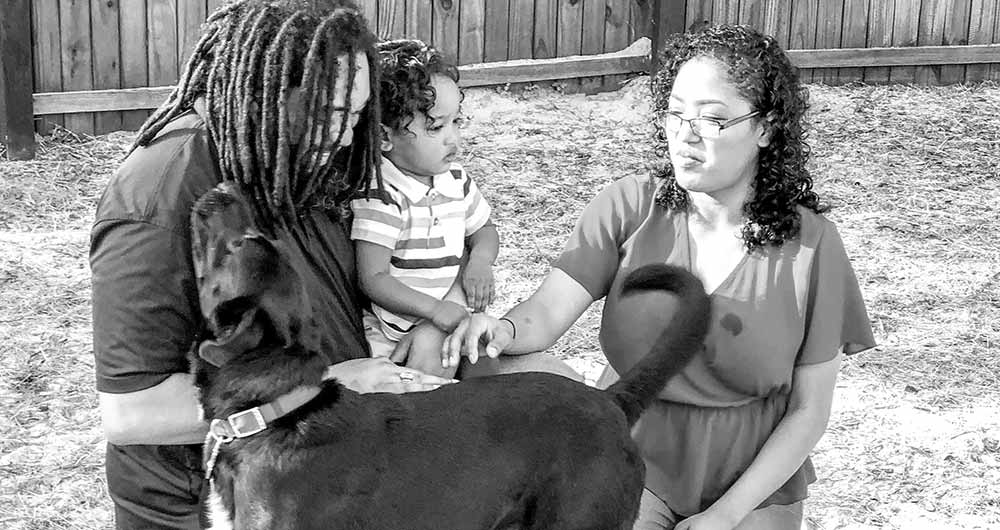 However, he recently reached out to get some help for post-traumatic struggles he has faced since serving in the Army National Guard. “I’m the PTSDeejay,” he joked.

Morris, a combat veteran who served in Operation Iraqi Freedom, as part of a field artillery unit, looked into getting a service dog.

He checked with a group in Galveston County, who recommended him to look into a program called the Wins for Warriors Foundation.

The program was started by Justin Verlander, pitcher for the Houston Astros. Verlander states on the Wins for Warriors website that the program came from a desire to give back to men, women and families “making countless sacrifices every day to give others the ability to pursue the American Dream.”

One of the primary functions of the program is in adopting, rescuing and training service dogs for veterans. The organization finds dogs from shelters, primarily.

Morris said he was placed with a dog not long after contacting the organization. Earlier in the month, he went to Florida with the dog, named Bear, for training. The trainer who trained Bear, Ernie Rivera, is also a combat veteran, Morris said.

Morris said having Bear at his side has been a welcome comfort and he wants to let fellow veterans who might be struggling know that programs such as Wins for Warriors are out to help them.

“I want to let some of the veterans know there is help out there,” he said. The program, since its inception, has obtained funding from companies such as Papa John’s as well as the Houston ASPCA.

According to information on the Department of Veterans Affairs website, PTSD is a common factor in veterans who have been exposed to life-threatening experiences.

The website states that about 11-20 out of every 100 veterans who served in Operation Iraqi Freedom are diagnosed with the condition in a given year. The Mayo Clinic defines a state of immobilization or being “stuck” as PTSD; when one’s nervous system is unable to return to its normal state of balance following danger or traumatic situations.

According to Wins for Warriors, the organization depends on community support, funding and help from businesses and individuals to support its goals of an impactful and sustainable veterans’ organization.

Morris said one of the differences that having a service dog has made is that it has gotten him back out of the house and playing DJ gigs, with the accompaniment of his friendly Labrador mix sidekick, of course.