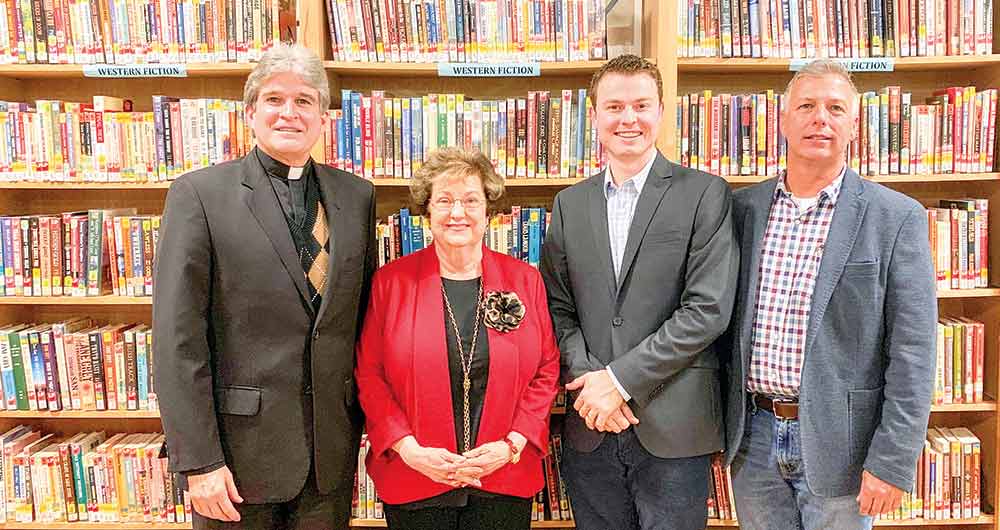 Father Frank Rossi of Our Lady of the Pines Catholic Church, Dr. Collin Bullard of Woodville’s First Baptist Church and Curtis intrigued all with views on Lewis’ classic written works.

Lewis (1898-1963) made a phenomenal impact upon the followers of Christ with his books explaining the life of faith. Even 56 years after his death, Lewis’ writings still inspire the lives of young and old, scholar and laborer, Christians in every denomination, and a few agnostics and atheists.

His legacy made this forum’s panelists all the more apropos. Curtis, an award-winning journalist with a master’s degree and experience on Capitol Hill in Washington D.C., collaborated with authorities ranging from professors, song writers, and others sharing the jewels found in Lewis in her seventh book, Women and C.S. Lewis.

Fort Worth-based Curtis told the Booster, “Women and C.S. Lewis was written in the ‘popular’ voice, rather than the ‘scholarly,’ to be an easy read by people other than scholars, like fans of The Chronicles Narnia who are excited to learn Netflix is producing the series. I’m honored to join the esteemed panelists here in Woodville.”

Rossi, a scholar with advanced degrees and study in Rome, the pinnacle of Catholic scholarship, gave superb illustrations from J.R.R. Tolkien, author of the Lord of the Rings, and author G.K. Chesterton, both mighty influences on Lewis—and, Rossi noted, both Catholics.

Bullard, who holds a Ph.D. from Cambridge where Lewis taught, brought the Protestant perspective. Library board member Col. Eddie Boxx organized the event and welcomed all and gathered audience questions.

One question to Curtis asked why her book focuses on “women and Lewis,” instead of both women and men. Curtis lit up as she told her story of hearing allegations that Lewis had a low view of women, maybe even being a misogynist. One critic was Harry Potter author J.K. Rowling, who has offered unfair Lewis criticism.

Curtis said “People like Rowling, and others named in the book, can negatively influence how the public perceives all people of faith with unjust hearsay about one of its most trusted icons, C.S. Lewis.”

Curtis said she felt the need to investigate—to set the record straight—and her book of esteemed contributors confirms that Lewis was no chauvinist. “In fact,” she said, “Lewis was ahead of his time in his treatment of women in his life and literature.”

For those unfamiliar with Lewis’ treasures, several classics were quoted, like Mere Christianity, Screwtape Letters, The Great Divorce, The Problem of Pain, A Grief Observed, The Chronicles of Narnia, and Surprised by Joy: the Shape of My Early Life. Curtis encouraged first-time readers to start with Surprised by Joy, his autobiography. More than settling the issue on Lewis’ views on women, Curtis’ book adds a pivotal contribution to the literature about Lewis.

Each panelist brought out surprising, enlightening depths to Lewis. As an “apologist”—a term meaning “explainer of the faith”—Lewis, the former atheist, became a champion of Christianity’s truths and more. His power and precision in writing were uniquely penetrating and often peerless, and his creativity let loose Christian and moral truths people could appreciate. He wasted no words.

Rossi reflected upon Lewis’ rejection of God as a youngster when his mother died. After coming to Christ later in life and marrying his beloved wife, Joy, who suffered and died from cancer, Lewis came to see God clearer.

Lewis’ revelation was, Rossi explained, “If he loved his wife more than he loved God, then that made his wife a god. Lewis could not love her ‘well,’ if he put her above God. Lewis understood that you can only love people well, if you love God first. That love of people must flow from a love of God, or it is based in pride. For C.S. Lewis, pride was the greatest sin.”

About Lewis’ view of pride, Bullard added, “Humility then, for Lewis, becomes the chief virtue.” Bullard touched on A Grief Observed, which Lewis wrote using a pseudonym after his wife died. Because of humility, Lewis was careful about what others might think of his grieving. Ironically, friends shared with Lewis his own book to aid his consolation.

The audience enjoyed anecdotes about Lewis, such as what Curtis described as “his suffering from workplace discrimination. As his fame grew because of his writings explaining the Christian faith, some in Oxford University’s management became embarrassed and passed him over for promotions. But Cambridge University was more enlightened, so they offered Lewis the chairmanship of their Medieval and Renaissance Literature Department.”
Curtis has stayed in Lewis’ home in Oxford, England, and Bullard studied at Lewis’ beloved Cambridge.

Lewis’ concept of “longing for the Divine,” which he described with the word “joy,” was mentioned by panelists as a bit unattainable until we reach the New Jerusalem.

Bullard said the theme of joy runs throughout Lewis’ fantasy and non-fiction. His autobiography, Surprised by Joy, joins his other writing in pointing to heaven.

Ironically, Lewis married a woman late in his life with the first name of Joy.

Rossi noted how G.K. Chesterton influenced both Lewis and his best friend, Tolkien. “As an atheist, C.S. Lewis had no sense of humor and no joy. How can one find joy in the midst of a world war?” Rossi added that Lewis’ eventual acceptance of the Christian faith developed in Lewis his famous joy and his great wit.

Boxx offered a question on “love” to Bullard, who pointed to Lewis’ classic book, The Four Loves. Lewis, Bullard said, makes “observations about different kinds of love that we find in everyday life. The chapter on friendship, Bullard noted, included the affection of a child may have for an old gardener that frequents one’s home. Such affection called friendship often comes as a realization of shared mutual interests. Quoting Lewis, Bullard added, “We picture lovers face to face, but friends side by side, their eyes looking ahead.”

Bullard noted how Lewis criticized natural love—eros, another of the four loves—because “often our culture places eros in the first position. Eros is a good thing, says Lewis, when it holds second place. When eros is placed in the first position, above love of God, it becomes an idol.”

Bullard added that Lewis also articulated love—agape—in The Great Divorce, which is about a fantastical bus ride to hell and to heaven.

There was much more, as the panelists “bused” international insights on C.S. Lewis’ inimitable treasures to Woodville’s beloved Allan Shivers Library and a packed house of literature lovers.
At the end, Boxx asked Woodville Mayor Paula Jones to draw for a free copy of Curtis’ book, and Maureen Peltier was the lucky winner.