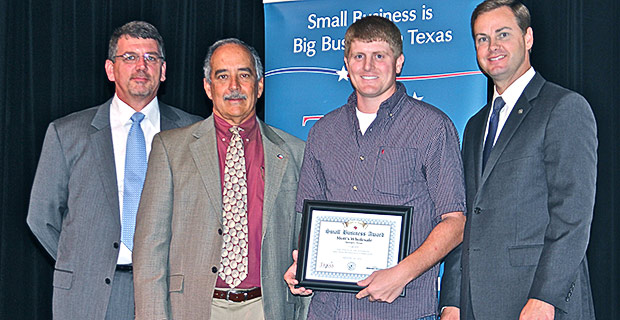 Mott Wholesale, winner of the 2013 Texas Small Business of the Year award for Tyler County, will be holding their annual TKC Knives and Collectable Show "Built in Bradford Tour" on October 19 at 9 a.m. Sign ups for the limited edition Built in Bradford equestrian Knife will begin at 8 a.m at Motts Wholesale – TKC Knives and Collectables in Spurger on Highway 92 South.

"This is a knife show where they will have a commemorative knife that they feature for people that collect knives," said Billy Ratcliff, a resident of Spurger and spokeswoman for the community. "There will also be a quilting group, the Raggie Mae Quilters, with a booth auctioning off a Case Knife quilt that benefits Cystic Fibrosis Research. They do this because of a girl in the community that has had the disease since she was born. There is also a club that does Cast Iron Cooking that sets up and demonstrates the cookware and makes food such as sausage and beans and cobblers."

Ratcliff said that all of the food is free for attendees to sample and eat, and that the event does not even charge admission.

"Every hour there will be Case door prizes given away," Ratcliff said. "Motts is also selling a commemorative knife benefiting the Tyler County Courthouse Restoration Fund and you can pre-register for that knife at the event. The church will also have a hospitality booth that will give away cookies."

"Everything is free," Ratcliff said. "You won't pay for anything."

The event usually gathers 400 to 500 people, with some traveling from miles away to acquire one of the limited edition Built In Bradford equestrian knives that will be available.

"There is usually an official with Case knives in attendance," Ratcliff said. "It ends up being a big event. A lot of the people in the community go down and visit and eat and knife collection people come from all over and are usually there by 8:00a.m because there is only a limited number of the knives that they sell."

According to Ratcliff, the proceeds from the limited edition Built In Bradford Knives will go toward the Tyler County Courthouse Restoration Fund.

"We are trying to restore the Tyler County Court House like it was in 1891," Ratcliff said. "There is state funding that was available, but we have to indicate that we are working toward that. But our courthouse is considered one of the three worst courthouses in Texas with the condition that its in. They've really started trying to raise money for that in the last year. They Tyler County Historical Commision has also been working for several years but they have just begun to try to get people to donate money, and Marvin Mott agreed to make this knife for the benefit of the Tyler County Courthouse fund. If you give a $100 donation, you receive one of these beautiful knives."

According to Ratcliff, Mott thought the project is a worthy cause and is always looking for ways to give back to the community.

"Motts is also auctioning off a knife for the Christian Women's Group," Ratcliff said. "He tries to give back to the community. They are really good people. Its also such a fun thing to do."